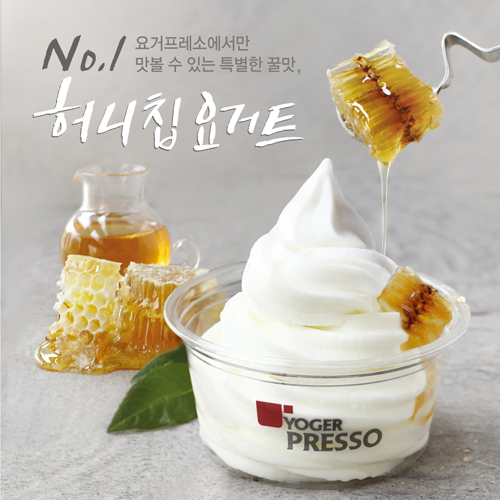 Another brands are set to join the “honey chip ice cream” fray which enjoys huge popularity among the local consumers. (image: Yogerpresso)

SEOUL, Korea, April 26, 2014 (Korea Bizwire) – As dessert cafés with “honey chip ice cream” are springing up all over Seoul, a dispute surrounding design counterfeiting between two successful dessert franchise firms has been presented to the courtroom. The outcome of the litigation is expected to saddle burdens to no one but the franchisees.

Softree, the operating company of honey chip ice cream specialty franchiser “Softree,” has filed for an injunction on the use of its design rights against “Mcostar,” the franchiser of “Milkcow,” another premium dessert café chain serving the ice cream, for copying design of its product, container, menu, and store interior.

Honey chip ice cream, an ice cream topped with honey comb and served in a cone or a cup, is popular dessert in downtown Seoul. Since the success of its premier shop, Softree has thrived ever since and opened up 26 more stores in some of the largest department stores and most crowded commercial districts of Seoul.

The fortune of the franchiser was immediately followed by the mushrooming of many premium desserts cafés with much resembling concept, and incumbent cafés also started to add the popular ice cream on their menu.

An official at Softree said, “It is true that we have filed for an injunction against Milkcow with the Seoul Central District Court. We have also petitioned disposition of prohibition of franchise contract against the head office of Milkcow.”

Mcostar, the mother company of Milkcow, is a famous restaurant franchise firm, who launched the franchise early this year, and looks to expand its business to overseas.