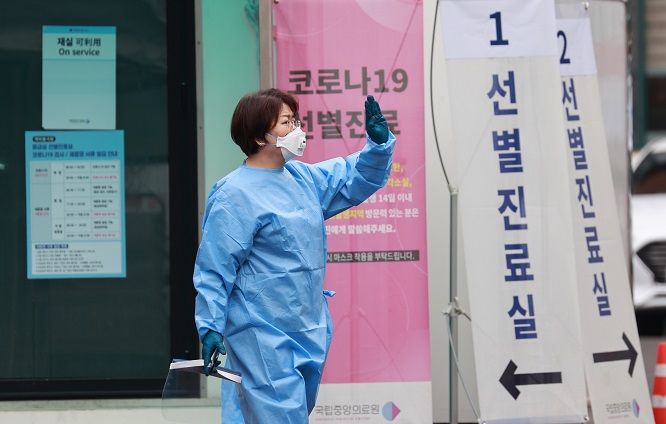 A medical employee works at a makeshift clinic in southern Seoul on Nov. 6, 2020. (Yonhap)

SEOUL, Nov. 11 (Korea Bizwire) — A recent survey revealed that about a half of the healthcare workers at South Korea’s clinic-level hospitals with no patient rooms have been forced to take unpaid leave or annual paid leave due to the spread of the COVID-19 pandemic.

The Korean Health and Medical Workers’ Union conducted a survey of 1,372 healthcare workers, including nurses, doctors and administrative workers.

Among the medical workers working at clinic-level hospitals with no patient rooms, 30 percent said that they either hadn’t signed an employment contract at all or hadn’t received a copy after signing.

Almost two thirds of the respondents also said that they had not received any pay stubs.

The union showed concerns that without pay stubs, it would not be possible to check if overtime or holiday work allowances were paid, resulting in the prevalence of free labor.

In reality, 22.9 percent of the healthcare workers employed at clinic-level hospitals with no patient rooms said they worked nights, while 57.6 percent said they worked on Saturdays. The share of those who said they work on holidays stood at 20.4 percent.