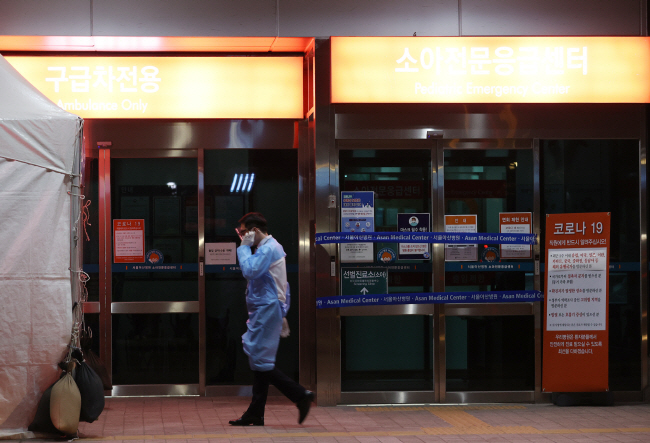 The pediatric emergency center of Asan Medical Center, a major general hospital in Seoul, is closed after a nine-year-old hospitalized girl tested positive for the novel coronavirus on March 31, 2020. (Yonhap)

SEOUL, April 9 (Korea Bizwire) — A growing number of South Korean hospitals are reporting financial difficulties as their outpatient numbers have dropped significantly due to the COVID-19 outbreak.

According to a survey of 62 hospitals conducted by the Korean Medical Association (KMA) the number of outpatients dropped by an average of 16.3 percent (44.5 patients) in February and 33.8 percent (88.9 patients) in March.

Revenues also declined as the number of patients decreased. According to the survey results, average monthly revenue fell 8.4 percent (83.9 million won, US$69,150) in February, and 32.5 percent (443 million won) in March.

On the other hand, the hospitals’ expenses have increased as more doctors and nurses have been hired to respond to the COVID-19 outbreak.

The average increase in expenses at eight hospitals that have expanded their workforce reached up to 37 million won.

The KMA argued that the government should support hospitals suffering from financial difficulties.