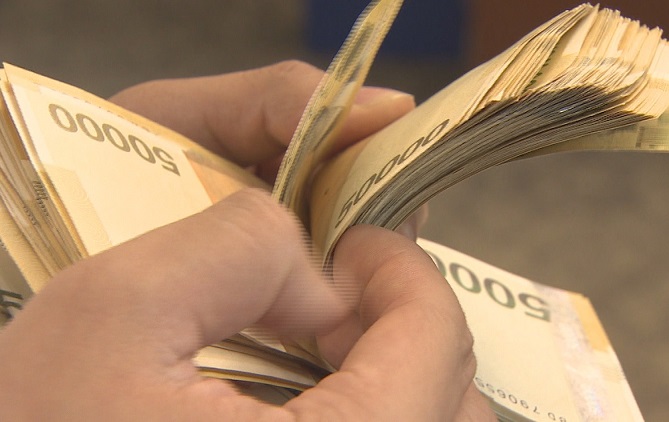 It marked the first time for households’ cash assets to exceed the 90 trillion-won level since records began in 2008. (Yonhap)

Cash held by households and nonprofit organizations stood at 90.1 trillion won (US$75.9 billion) as of the end of March, up 3.4 percent, or nearly 3 trillion won, from three months earlier, according to the data from the Bank of Korea.

It marked the first time for households’ cash assets to exceed the 90 trillion-won level since records began in 2008.

The on-quarter increase rate was also the largest since the 4.5 percent gain recorded in the third quarter of 2018.

Market watchers attributed the rise in households’ cash pile to the fallout from the outbreak of COVID-19, with first case confirmed in South Korea on Jan. 20.

“The coronavirus scare was the most severe in South Korea during the first quarter. Households sought to pile up cash out of concerns over their future,” said Hwang Se-woon, a senior researcher at the Korea Capital Market Institute.

The data also showed local households’ cash holdings accounted for about 2.3 percent of their total financial assets as of end-March, the highest ratio on record.

South Korean households’ financial assets totaled 3,975.8 trillion won at the end of March, down 0.14 percent from December, marking the first drop since the fourth quarter of 2018.