What typically troubles both the couple set to tie the knot as well as their well-wishers is perhaps not unexpected – money. (Image: Yonhap)

SEOUL, April 17 (Korea Bizwire) — The welcome arrival of warmer weather is bringing with it an unlikely source of stress for many involved.

According to wedding consulting agency Duowed, the spring months of May and April fall behind the autumn period from October through November as the second most important unofficial “wedding season” in South Korea.

What typically troubles both the couple set to tie the knot as well as their well-wishers is perhaps not unexpected – money. Specifically, the former face intimidating costs of holding their nuptials, while the latter often find themselves spending significant amounts as “choogigeum”, a Korean tradition of gifting congratulatory money by friends and acquaintances of the bride or groom.

Thirty-year-old Seo, recipient of three wedding invitations in recent days, counts as one of the latter. Since late last year, Seo estimates that he has parted with around 500,000 won in choogigeum, with each gift of money ranging from 50,000 won to 300,000 won slipped into a white envelope. Though Seo puts on a brave face at the prospect of doling out almost a quarter of his monthly 2 million won salary, he acknowledges that the congratulatory gifts are “burdensome”.

The fact that choogigeum is given as a gift meant to be reciprocated – recipients take note of how much was given and by most counts repay the exact amount as choogigeum at the giver’s wedding – does make the prospect of handing out hundreds of thousands of won easier to stomach for some. Now five years into married life, thirty-five-year-old Ryu said, “When I got married, I did get a lot, and when other [weddings] happen, that money will be returned.”

What seems to be the overarching problem, of which choogigeum is but a smaller but nonetheless indelible contributing factor, is the economics of getting married in South Korea.

Though Seo puts on a brave face at the prospect of doling out almost a quarter of his monthly 2 million won salary, he acknowledges that the congratulatory gifts are “burdensome”. (Image: Yonhap)

Duowed found in a study on wedding expenses this year that the average newlywed couple’s marriage nest egg was around 238 million won. Subtract the cost of housing from this budget (167.9 million won), and marriage expenses still amounted to 63 million won.

With South Korea weighed down by historically high unemployment rates, especially among young people, the financial hurdles blocking the path to the altar appear to be persuading South Koreans to postpone marriage. Among singles, 62 percent named “rising marriage costs”, and 56.8 percent said “gaining employment at later ages” as the principal impetus for delaying marriage, according to a 2017 survey by pollster Opensurvey.

Thirty-six-year-old Park and his fiancee say that money, and specifically the wherewithal to host their wedding ceremony, is what’s keeping the two lovebirds from getting married. “We decided that we have no choice but to keep saving to be able to account for the tens of millions of won a wedding ceremony is going to cost,” Park said.

With money occupying such a deciding role in couples’ marriage plans, it’s little wonder that choogigeum is a must for many. A recently married young man who asked to be identified as Kang said, “Being able to get married without taking in choogigeum is in reality a difficult problem.” Kang went on to say that he had spent over 3 million won alone sending out invitations.

Perhaps unsurprisingly, research conducted by the Korean Women’s Development Institute has found that 75.8 percent of adults believe that there are problems with the modern “marriage culture”. While a leading 44.8 percent of all study participants’ responses was “excessive dowries incompatible with one’s normal living standards”, a combined 28.5 percent were “the mindset that a wedding must be as grand and fancy as others’ nuptials” and “weddings that must abide by old-fashioned notions”.

Until the desired paradigm shift happens, however, weddings will likely continue to cost big money, and to prop up such major events, choogigeum will be required.

Though gift-giving in and of itself is not a bad thing, the downside is that choogigeum can become not only a source of stress, but also a point of unspoken resentment. 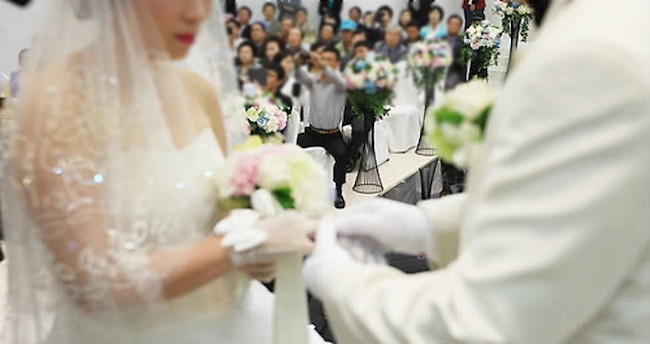 “We decided that we have no choice but to keep saving to be able to account for the tens of millions of won a wedding ceremony is going to cost,” Park said. (Image: Yonhap)

Stories of receiving wedding invitations from old college acquaintances out of the blue after a long period of zero contact are not unheard of, and these situations often leave South Koreans agonizing over whether to take up the invite, knowing that to go would mean giving choogigeum. Even when choosing not to attend, some ask for bank account numbers to wire transfer choogigeum, either out of obligation or a sense of guilt.

Even those who do offer congratulatory money gifts may be unknowingly held to a different standard depending on their largesse.

Han, who tied the knot three years ago, said views on personal relationships change after holding a wedding. Among the people Han considers himself close to, he mentally distinguishes between those who either attended the wedding, or if they were unable to do so, expressed their “sincerity” – in the form of choogigeum sent – and those who did not.

Han summed up the somewhat complicated dynamics of the situation with a clear paradox: “It’s of course not right to look at people differently depending on the amount of choogigeum they gave, but the amount does matter.”