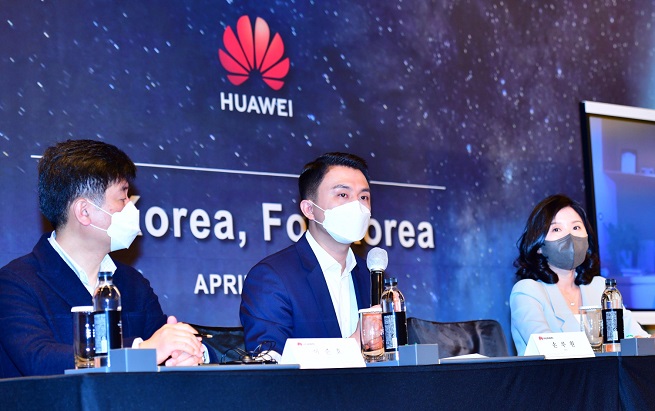 Huawei Korea CEO Sun Luyuan (C) speaks during a press conference at the Four Seasons Hotel Seoul in central Seoul on April 13, 2021, in this photo provided by the company.

SEOUL, April 13 (Korea Bizwire) — Huawei Technologies Co. blamed the United States on Tuesday for a global chip shortage as it called for cooperation with South Korea, Japan and Europe to form a new semiconductor supply chain.

The move came hours after U.S. President Joe Biden urged more spending in the chipmaking sector to resolve the chip shortage and build up a stable supply chain.

A recent shortage of semiconductors has stalled production across manufacturing industries, especially in the auto sector.

Karl Song, Huawei’s vice president of corporate communications, called for the lifting of U.S. sanctions, which the Chinese network equipment maker claimed has led to the recent chip crisis.

Currently, the Chinese telecom equipment giant is being cut off from semiconductors made with U.S. equipment, software and designs due to U.S. sanctions over national security concerns.

“The current global chipset shortage is due to the sanctions (Huawei) faces and its impact on the companies that we cooperate with,” Song said in a press conference.

“We hope to cooperate with advanced semiconductor countries, such as South Korea, Japan and Europe, to form a global supply chain again,” he said.

Eric Xu, Huawei’s rotating chairman, said Monday that U.S. sanctions against the company have hurt the broader semiconductor industry as they have created supply uncertainties.

The U.S. has long alleged that Huawei’s equipment is used to spy on foreign networks, a claim repeatedly rejected by the Chinese company.

The U.S. sanctions have hurt the Chinese tech giant, which requires semiconductors for its telecom equipment and electronic devices.

Huawei said it still plans to further strengthen its presence in South Korea by collaborating with South Korean companies, adding that it has made purchases worth US$37 billion from South Korea over the past five years.

In Washington, Biden said Monday that the U.S. will increase its investment in infrastructure to protect its supply chains, including the supply chain of semiconductors.

His remarks came in a meeting with the top executive officers of 19 global firms, including South Korea’s tech giant Samsung Electronics, to discuss ways to address the ongoing shortage of semiconductors.