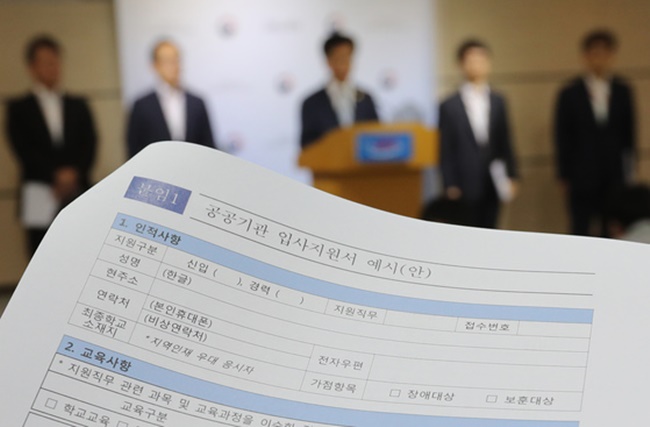 SEOUL, Dec. 18 (Korea Bizwire) – A human rights watchdog in South Korea issued a warning to universities and scholarship foundations over the collection of information regarding recipients’ parents.

Some universities and scholarship foundations in South Korea have been asking applicants to provide detailed information about their parents, including their occupation, position at work and education level. In addition, applicants are often asked to provide their resident registration number and a picture of themselves.

It’s not uncommon for universities and scholarship foundations to ask applicants to offer proof of financial means, or explain in writing why they need a scholarship.

The NHRCK argues, given the purpose and aim of scholarships, some of the pieces of information are not necessary, and warns they could constitute a human rights violation on account of excessive information collection.

“Asking for parents’ personal information and students’ resident registration number could be in breach of the Personal Information Protection Act, as well as people’s right of self-determination regarding their information, and asking for pictures breaches the NHRCK’s ban on discrimination based on appearances,” the NHRCK said.

“Cover letters essentially ask students to prove how poor they are. When applicants’ financial status can be objectively monitored through evidence provided by public institutions, there is no need to make students write about their poverty in detail in cover letters,” the group added.

As the NHRCK argues for the minimum level of personal information collection during the scholarship application process, education authorities including universities and foundations are being urged to refrain from forcing students to focus on their financial status in cover letters.

Excessive personal information collection has been criticized as a problem in South Korea, particularly among job applicants.

Following criticism, the Ministry of Personnel Management announced plans to bring about transparency during the recruitment process and eliminate requirements that had been accused of excessive information collection earlier this year, banning pictures and questions about parents in the public service sector.