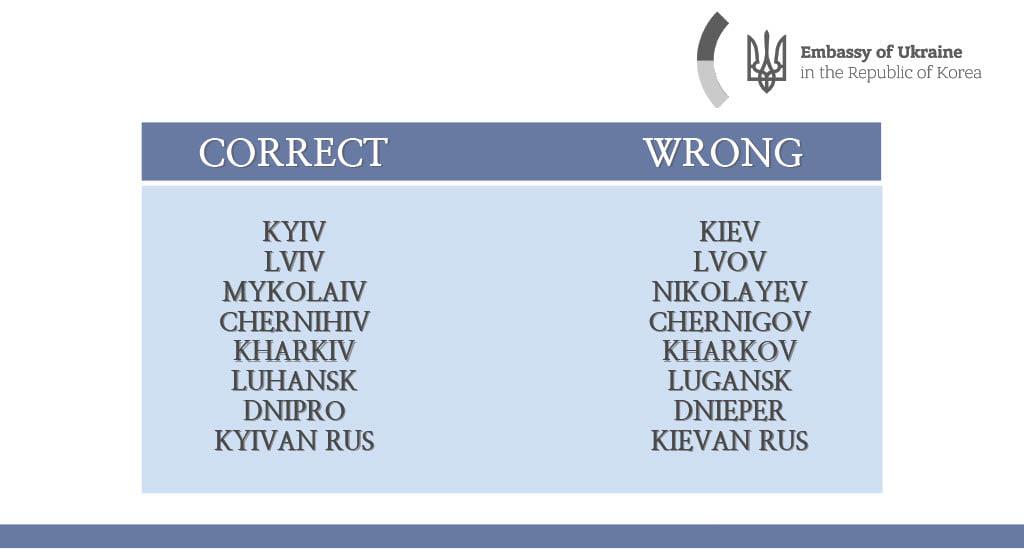 This image, captured from the Facebook page of the Ukrainian embassy in Seoul, shows spellings for Ukrainian names written in Ukrainian and Russian ways, respectively.

SEOUL, March 2 (Korea Bizwire) — The South Korean government is considering spelling and pronouncing names of Ukrainian cities and other areas in the way Ukrainians want as well, in a shift from the current style that only uses the Russian transliteration, an official said Wednesday.

The move comes at the request of the Ukrainian Embassy in Seoul amid keen public attention to the Eastern European country’s armed conflict with the invading Russia.

It has requested “the Korean public and authorities to stop using the names of Ukrainian cities in their Russian transliteration.”

The Ukrainian capital, for one, is called “Kyiv” in Ukraine but “Kiev” in Russia. Largely, South Koreans have so far used the Russian version of the Romanized name, apparently a legacy of the Soviet era, and transliterated it into their language, Korean.

“Please, do not offend us by calling our cities the same way that occupants do!” the embassy wrote in a Facebook post Tuesday.

According to a senior South Korean foreign ministry official, the ministry is having consultations with the National Institute of Korean Language over how to spell and pronounce the Ukrainian names.

“We are considering writing the names in both versions side-by-side for the time being, as an immediate shift could cause confusion,” the official said.

The ministry is expected to take a formal administrative measure on the issue after the institute makes a decision through a joint committee meeting on Romanization.