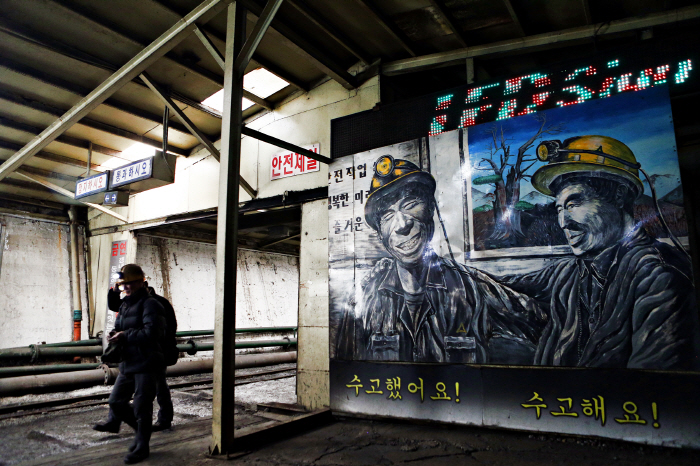 This is the second time the federation has staged a work stoppage since September 1999. (Yonhap)

TAEBAEK, Apr. 18 (Korea Bizwire) — In the wake of the death of a miner at the Jangseong Mining Station owned by Korea Coal Corp. last month, coal miners who had demanded safety measures warned of a sit-in in a mine shaft thousands of meters underground.

In a letter to the citizens of South Korea, Federation of Korean Mine Workers’ Trade Unions said, “We are trying to fight for the lives and safety of our colleagues by holding the shame for not being better husbands and the regret of being poor fathers.”

It has been reported that the federation will hold a ceremony marking the beginning of the sit-in at the Jangseong Mining Station in Taebaek, Gangwon Province, on April 21, which will mark the start of the strike.

Three coal mining unions in Taebaek, Samcheok and Hwasun are expected to participate in the walk out.

The federation had earlier resolved to resort to collective action on April 9. As a result, the mason’s union has been recruiting candidates for the sit-in since April 11.

So far, out of total of 946 union members, most of the members of the mine workers’ union have expressed their intention to join the strike.

This is the second time the federation has staged a work stoppage since September 1999.

However, unlike 1999, when only 13 representatives of the federation participated, the sit-in protest is expected to reach hundreds of participants, raising concerns over possible safety accidents.

As a result, the Jangseong Mining Station is on high alert, as it is taking measures to prepare for the labor union’s sit in.

A source at the mining office reported on Tuesday that the thousands of meters of underground caves are fraught with various disaster risks such as falling rock, collapses, gas leaks and fire.

The federation hopes to avoid any situations resulting in harm to the workers.

Meanwhile, the federation is calling on the government to come up with countermeasures after one worker was killed and five others were injured in an underground accident at a Jangseong mine on March 27, blaming restructuring as a cause of the incident.