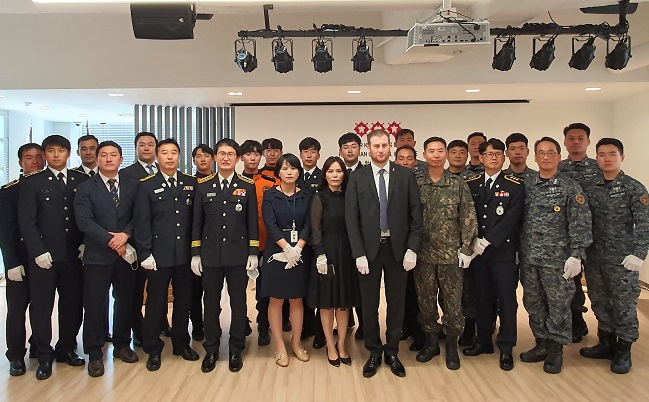 SEOUL, May 30 (Korea Bizwire) — Hungary awarded 38 South Korean divers and other rescue officials medals of merit for their efforts and service in search operations for Korean and other victims in last year’s boat sinking in Budapest, its embassy in Seoul said Friday.

A ceremony was held at the Hungarian Cultural Institute in central Seoul on Friday to present the medals of meritorious service to the rescue officials, the Hungarian embassy said, including Song Shun-keun, a former defense attache at the South Korean Embassy in Hungary who took a leading role in the monthslong search operations.

The divers and officials were dispatched to Budapest after 26 South Korean tourists aboard a sightseeing boat went missing after the vessel collided with a bigger cruise boat on May 29.

Bodies of 25 people have been found, but one person remains missing.

In the ceremony, Hungarian Ambassador to Seoul Mozes Csoma expressed gratitude to the divers and officials for their dedication and hard work during the operations, the embassy said.

Hungary is also planning to erect a monument near the accident site in the Danube River in the memory of the South Koreans killed in the boat sinking.

A memorial ceremony was to be held in Budapest on Friday (Hungary time) to mark the first anniversary of the accident.