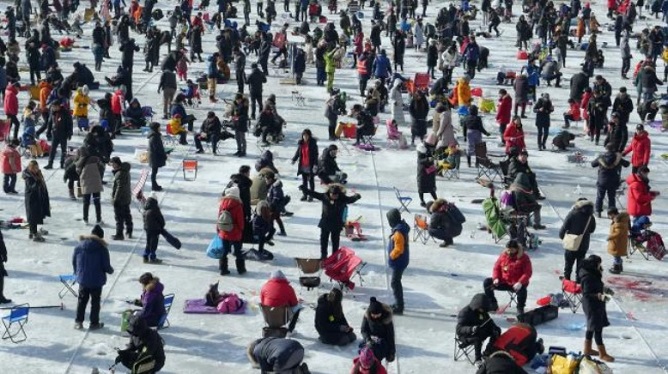 The 2019 Hwacheon Sancheoneo Ice Festival will kick off Saturday on a frozen river in the town for a 23-day run. (image: Hwacheon County Office)

The 2019 Hwacheon Sancheoneo Ice Festival will kick off Saturday on a frozen river in the town, about 120 kilometers northeast of Seoul and bordering North Korea, for a 23-day run.

More than one million people are expected to flock to the town to drop a fishing line through holes in the ice and catch “sancheoneo” — a species of trout known to live only in very clean fresh water. The festival’s signature program can be enjoyed day and night.

Nearly 20,000 fishing holes have been made on a frozen river section about the size of 24 soccer fields. The county will release 190 tons of sancheoneo during the festival period.

Clad in T-shirts and shorts, visitors can jump into the icy water to catch fish with their bare hands, another festival attraction. 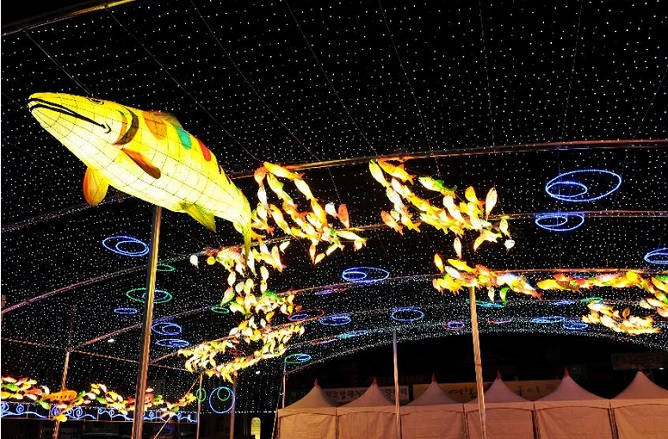 A street decked with lamps in the shape of sancheoneo (image: Hwacheon County Office)

Launched in 2003, the event was chosen as the nation’s best festival by the culture ministry in 2010 and has developed into one of the world’s four major winter festivals. CNN once touted it as one of the “Seven Wonders of Winter.”

The festival has also been drawing greater attention from foreigners. More than 110,000 foreigners visited the festival last year, and the county has been stepping up efforts to attract more foreign tourists this year.

The annual festival also features dozens of outdoor activities, such as a sled contest, bobsledding and football on the ice.

At night during the festival, a 5-kilometer street at the heart of the town will be adorned with 27,000 lamps made by its residents in the shape of sancheoneo, one for each person who lives in the town.

The town will also feature an indoor plaza of ice sculptures, which experts from China’s Harbin International Ice and Snow Sculpture Festival have manufactured.

County chief Choi Moon-soon said the county will make more efforts to further promote the festival. “We will try to make the festival known to Arab countries as well as Southeast Asia and offer more diverse programs befitting its global status.”