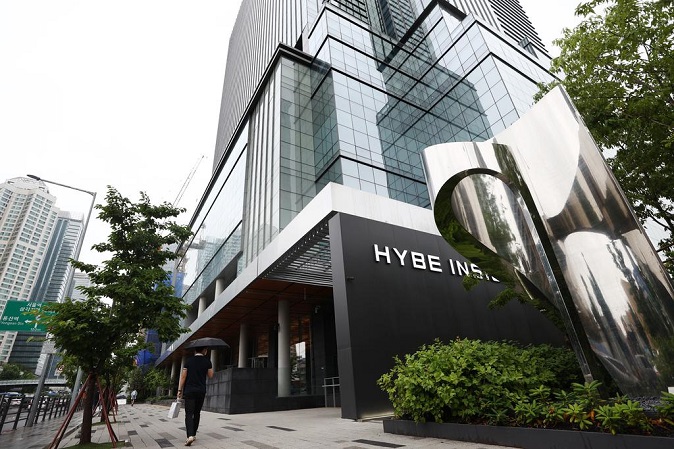 This photo, taken on June 15, 2022, shows the headquarters of Hybe, the agency of K-pop supergroup BTS, in Seoul. (Yonhap)

SEOUL, Nov. 3 (Korea Bizwire) — Hybe, the entertainment company behind K-pop superstars BTS, on Thursday reported a revenue of 445.5 billion won (US$314 million) for the third quarter of the year, up 30.6 percent from a year ago.

It marks the highest-ever third-quarter sales in the company’s history.

The record gains were a result of concerts and what the company calls “indirect involvement by its artists,” such as merchandise, licensing, and their participation in the creation of games and other content featuring them, the company said in a regulatory filing.

Revenue from albums declined by 0.4 percent on year to 129.2 billion won, but concerts generated 47.2 billion won of revenue. In comparison, there were no concerts of Hybe artists in the third quarter of 2021 due to the COVID-19 pandemic.

Revenue from artists’ advertisements, appearance fees and management fell by 11.7 percent on-year to 29.8 billion won, while the company saw a 34.7 percent increase in revenue from the artists’ indirect involvement to 239.3 billion won.

The average estimate of net profit by analysts stood at 48.5 billion won, according to a survey by Yonhap Infomax, the financial data firm of Yonhap News Agency.

The operating profit, however, was down 7.6 percent to 60.6 billion won.

Hybe explained the cost of producing an audition program to choose members of a new Japanese K-pop act was reflected ahead of the group’s debut in December.

In an online conference call, CEO Park Ji-won forecast the company will be under increasing margin pressure starting next year when BTS, which accounts for 60 to 65 percent of the company’s revenue for this year, begins serving in the military.

The firm, however, will be able to recover the current state after three years, boosted by the fast growth of rookie groups, such as NewJeans and Le Sserafim, and increasing revenue from IP licensing, he said.

“NewJeans and Le Sserafim aim for annual sales growth of more than 100 percent,” Park said. “The rest of the artists are also expected to grow at a high level of 30 to 50 percent.”

Jin, the oldest member of BTS, will soon undergo steps to enlist, as announced by his agency earlier, while the six other members will continue to pursue their individual activities for the time being, according to Hybe.

The company has said it expects the seven members to reunite as a group once again around 2025 after all of them have completed their military duty.