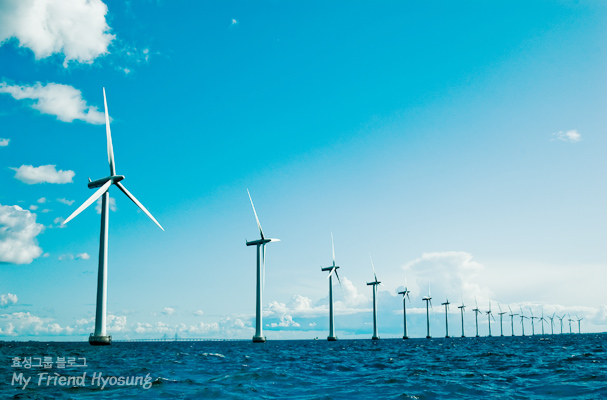 Until now, there have been only a few internationally reputable companies such as Siemens, Vestas, and Areva that have won certifications for 5-megawatt wind power generators. Among domestic operators, Hyosung is the only one. The biggest factor for Hyosung’s success lies in the fact that it has developed proprietary accelerators and generators since it began the wind power business in 2008.

The 5-megawatt offshore wind power system currently installed in Gimnyung, Jeju Island, is under pilot operation. With the height of more than 100 meters and the diameter of the wing as long as 139 meters, each wind power unit is capable of generating electricity sufficient for 3,600 households.

According to estimates by the industry, last year’s offshore wind power generation market was US$3.5 billion with 1.5 gigawatts. It is forecast to increase up to a $17.4-billion market by 2020 (7.6 gigawatts), with an annual average growth rate of 26 percent. Of these, the 5-megawatt wind power system is considered most promising in terms of efficiency.