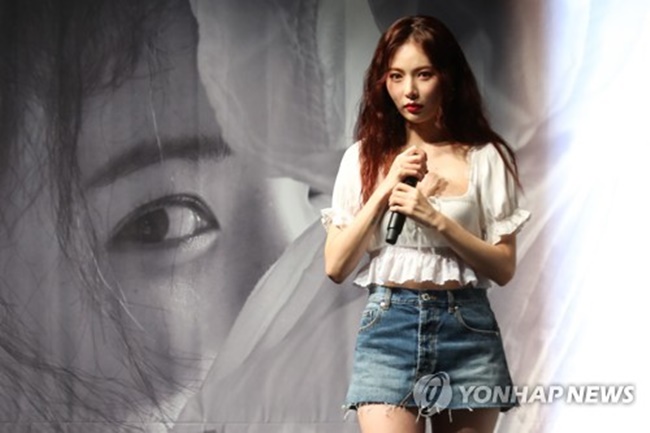 “This album is filled with my hope that fans and followers maintain their interest in me,” HyunA told reporters at a media showcase held at Blue Square Samsung Card Hall in central Seoul. (Image: Yonhap)

“This album is filled with my hope that fans and followers maintain their interest in me,” HyunA told reporters at a media showcase held at Blue Square Samsung Card Hall in central Seoul.

The 26-year-old songstress debuted in 2007 via Wonder Girls of JYP Entertainment but soon moved to Cube Entertainment to form 4minute. While the team disbanded last year, HyunA has enjoyed a successful solo career, with hits like “Change,” “Bubble Pop!” and “Ice Cream” under her belt. To a K-pop layman, she is perhaps most well known by her appearance in Psy’s “Gangnam Style” music video in 2012.

The title song “Babe,” produced by Shinsadong Tiger, is a tropical-rhythm dance track with minimal instrumentation that owes its warm sound to arrangements using analog module synthesizers. Also included in the album are “Party (Follow Me)” and “Purple,” songs produced together with Triple H, HyunA’s project band launched in April.

Now a decade deep into her music career, HyunA said this time she wanted to convey a sound and aesthetic that’s more “natural,” boldly posing for the camera for her album art with near-zero make up.

“I wanted to leave the most natural image of myself 26 years into my life,” said HyunA. Musically, HyunA said she wanted to try a sound that is opposite to her traditionally more ferocious and biting music.

“I tend to favor and like hip hop elements but this time I looked for ideas and sounds that would allow me to be natural on stage without appearing too strong,” the singer said.

The chanteuse is one of the veteran K-pop divas making solo comebacks this summer following Lee Hyo-ri last month and Sunmi of Wonder Girls, who made a successive solo comeback last week.

“I think Sunmi will be feeling the same way I’m feeling now. I can’t know for sure how hard she prepared, but I think I understand her current situation to a certain degree,” said HyunA.