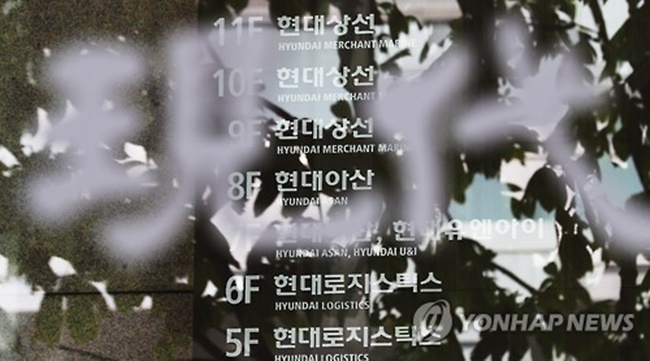 This file photo taken on July 10, 2016, shows the lobby of the headquarters of Hyundai Group in central Seoul. (Image: Yonhap)

SEOUL, July 18 (Korea Bizwire) – Hyundai Asan Corp. on Tuesday asked the government to give permission to visit North Korea next month to mark the anniversary of the death of its former chairman, the company said.

The memorial service for Chung Mong-hun, who spearheaded the now-suspended inter-Korean tour program in the North, had been held at Mount Kungang every year since his death in August 2003. Hyundai, however, did not seek approval for the visit last year due to rising tensions on the Korean Peninsula.

“The Ministry of Unification is reviewing our request,” a Hyundai official said. “If accepted, we need to also get approval from North Korea.”

Still, the group chief’s Hyun Jeong-eun is not expected to attend the ceremony in person even if a visit is arranged.

The request was made shortly after South Korea offered to hold inter-Korean military talks later this week to ease tensions and Red Cross talks to resume reunions of families separated by the 1950-53 Korean War.

Eyes are on whether Hyundai’s visit, if approved, could lead to the resumption of the inter-Korean tour program at the scenic mountain resort on North Korea’s east coast, which were launched in 1998.

The program was a symbol of the two Koreas’ reconciliation until it was suspended by Seoul following a shooting death of a female tourist by a North Korean soldier in July 2008.