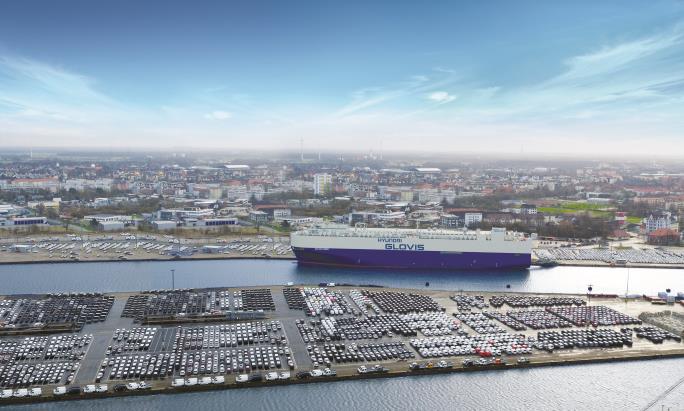 This undated file photo provided by Hyundai Glovis shows its pure car and truck carrier at the port of Bremerhaven in Germany.

SEOUL, Dec. 16 (Korea Bizwire) — Hyundai Glovis Co., a logistics unit of Hyundai Motor Group, has secured an exclusive shipping space at the port of Bremerhaven in Germany, one of the largest automobile shipping ports in Europe.

The company said Wednesday that it had signed a deal with the port’s terminal operator BLG Logistics Group to establish the joint venture BLG Glovis BHV GmbH, which will be responsible for the establishment of the exclusive shipping space.

Through the joint venture, the company plans to build an exclusive infrastructure at the Bremerhaven port that will consist of three berths and a 100,0000 square meter yard.

The exclusive shipping space will be built at the Kaiserhafen terminal, one of the port’s two terminals, with three out of five berths scheduled to be exclusively used by Hyundai Glovis. The 100,000 square meter yard will be capable of accommodating about 5,000 vehicles.

This deal would clear the way for Hyundai Glovis to speed up the transport of cargo for Volkswagen Group under a five-year shipping contract signed last year.

The company noted that the speed and accuracy of transporting the vehicles made in Europe by Volkswagen to major ports in China ten times per month would be upgraded.