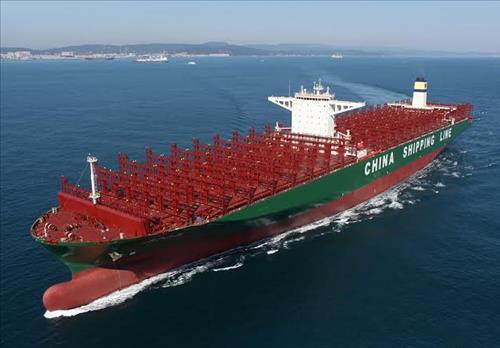 The ship was named as the CSCL Globe by He Li Jun, the spouse of Mr. Xu of China Shipping Group. (image:Hyundai Heavy Industries)

The electronically controlled main engine can improve fuel efficiency by up to 20 percent by automatically controlling fuel consumption according to the sea conditions and the speed of the vessel. After winning the first 10,000-TEU containership in 2005, Hyundai Heavy Industries has since built more than 80 such ships, the largest among the world’s shipbuilders.

A Hyundai Heavy official said, “Recently the shipbuilding industry is trying to build ultra-large containerships over 20,000 TEU as a way to save fuel cost and transport cost. Based on our containership building know-how and experience, we will try to win as many orders in this area.” Registered in Hong Kong, the CSCL Globe to be delivered within this month will operate on the Asia-Europe trade route.