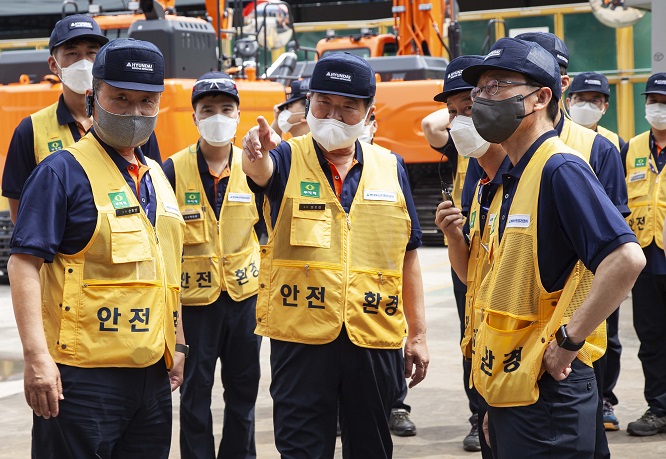 Kwon Oh-gap (4th from L), chairman of Hyundai Heavy Industries Holdings Co. (HHIH), visits a plant of Doosan Infracore Co. along with other company officials on Aug. 20, 2021, in this photo provided by HHIH the same day.

On Wednesday, Doosan Infracore finished legal dispute with its financial investors including Mirae Asset Private Equity, which are related to its Chinese unit Doosan Infracore China Co. (DICC) by buying back 20 percent stake in DICC from them for 305 billion won.

In 2011, Doosan Infracore invited financial investors of DICC to make inroads into the Chinese construction equipment market and repay its debts, promising to help them retrieve their investment by listing the shares of DICC on the Chinese market within three years.

In return for investments worth 380 billion won (US$346 million), Doosan Infracore gave a 20 percent stake in DICC to financial investors, holding on to a 80 percent stake of its Chinese unit.

Doosan Infracore promised that it would list DICC on China’s stock market to ensure profits of financial investors, but failed to list it on the stock market.

Financial investors filed a lawsuit against Doosan Infracore to retrieve their investment in November 2015.