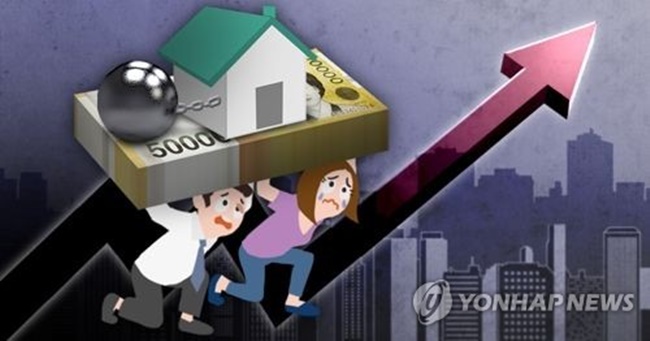 Households where the head of the family was over 55 have witnessed a 94.51 percent rise in income and 78.32 percent increase in savings in 2015 compared with 2001, according to a report by the Korea Economic Research Institute (KERI). (Image: Yonhap)

Households where the head of the family was over 55 have witnessed a 94.51 percent rise in income and 78.32 percent increase in savings in 2015 compared with 2001, according to a report by the Korea Economic Research Institute (KERI).

The value of their property and financial assets surged 157.35 percent and 98.3 percent, respectively, while their debt jumped 133.98 percent during the same time span.

The analyst also dismissed concerns that any hikes in interest rates would result in a drastic contraction in consumption, adding the growing asset value should be able to offset the risk from rising debt.

The newly launched Moon Jae-in administration has presented measures to curb household debt and a spike in property prices.

Finance Minister Kim Dong-yeon has said the property market in Seoul is showing signs of overheating, noting the country’s household debt, including credit purchases, rose to a record 1,359.7 trillion won (US$1.2 trillion) at the end of March.

The previous Park Geun-hye administration eased the loan-to-value (LTV) and debt-to-income (DTI) ratios in 2014 to allow homebuyers to borrow up to 70 percent of their property value and upwards of 60 percent of their income for mortgage payments.

The Moon administration, however, lowered the LTV level in Seoul, Gyeonggi Province, and certain areas in Busan and the administrative capital of Sejong to 60 percent from 70 percent starting Monday, while adjusting down the DTI ratio to 50 percent from 60 percent.

Such measures will make it harder for people to take out loans and help contain real estate speculation, the government said.