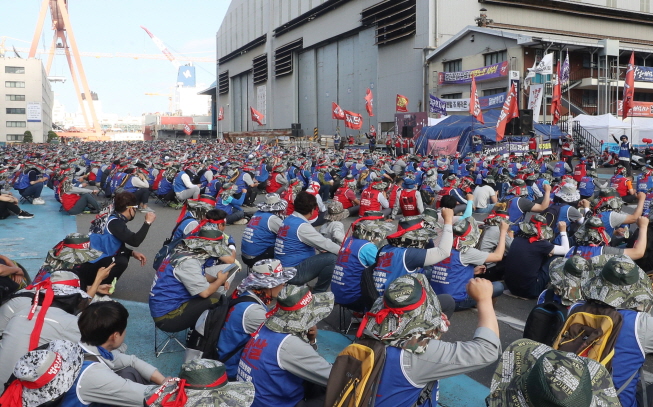 Hyundai Heavy Industries labor union workers participate in a strike at the company’s plant in Ulsan on June 24, 2019. (Yonhap)

Hyundai Heavy has held 16 rounds of wage negotiations with the union since May 2, but the sides have yet to find common ground.

“There is a possibility that this year’s wage agreement cannot be reached by end of this year,” an official at Hyundai Heavy said.

“The union is scheduled to hold an election next month to select its new leadership, so if the deal is not reached by end of this month, it is likely that the negotiations will continue through next year.”

The union has been demanding that Hyundai Heavy raise the basic monthly wage by 123,000 won (US$103), among other proposals. The unionized workers have also launched partial strikes to make their demands heard.

“The management has yet to come up with its wage proposals for this year’s collective bargaining,” a Hyundai Heavy union spokesperson said.

“The company is saying that it will roll out its wage proposals if the union accepts its merger with Daewoo Shipbuilding & Marine Engineering Co.”

The union, which has 10,000 members, has been opposing Hyundai Heavy’s plan to merge with Daewoo Shipbuilding, claiming that it risks workers’ job security.

The lengthy wage dispute came amid the shipyard’s struggle to win more orders.

In the first eight months of the year, Hyundai Heavy secured orders for 17 vessels worth a total of US$2.17 billion, or only 27.1 percent of its annual target of $8 billion, industry data showed.

Unionized workers at Hyundai Mipo Dockyard Co. said they will stage a strike Friday since there has been no major progress in 23 rounds of wage negotiations.