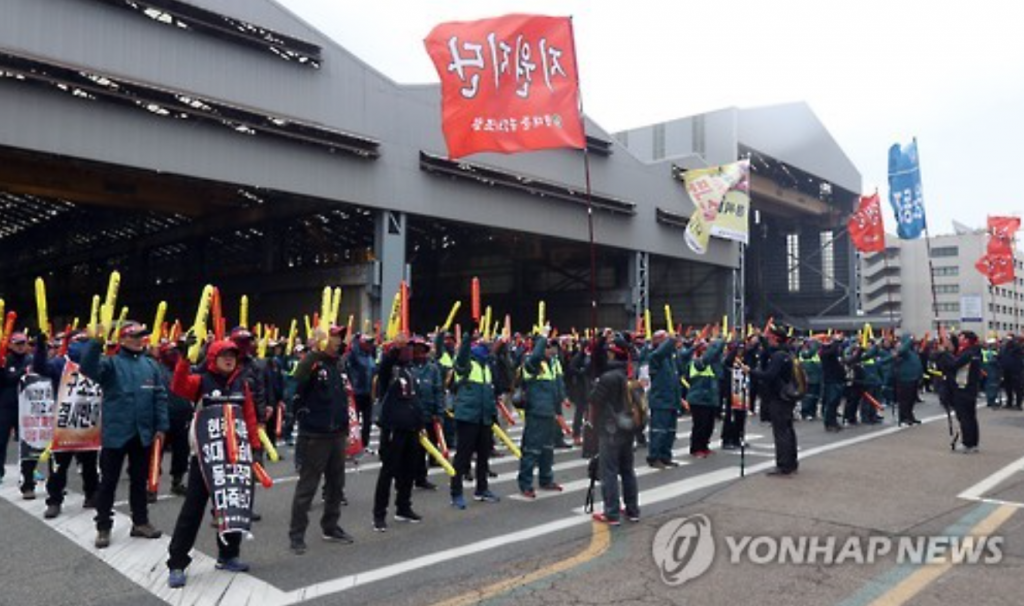 SEOUL, Nov. 23 (Korea Bizwire) – The labor union at Hyundai Heavy Industries Co. on Wednesday threatened to launch a full-scale strike calling on the company to scrap its plan to spin off non-shipbuilding units, which it claims will lead to a sell-off.

Last week, Hyundai Heavy, one of the country’s big three shipyards, announced a scheme to reorganize its businesses into six separate companies next year in its latest efforts to regain competitiveness and financial health.

The decision comes in the form of part of the shipyard’s self-rescue plans announced early this year in which it said it will seek to sell noncore assets and cut jobs.

“The company’s withdrawal of the spin-off plan is a precondition for the completion of this year’s wage deal,” the labor union said. “If the management pushes ahead with it, we cannot help launching a full-fledged strike.”

Since May, the management and the labor union have been negotiating a wage deal, but the labor union has staged partial strikes this month in opposition to the company’s early retirement scheme and other restructuring moves.

Hyundai Heavy shifted to a net profit of 971.19 billion won (US$850 million) in the January-September period from a net loss of 985.17 billion won a year earlier, largely thanks to its efforts to cut costs.

Hyundai Heavy and the world’s leading Korean shipbuilders, such as Samsung Heavy Industries Co. and Daewoo Shipbuilding & Marine Engineering Co., have been under financial strain amid a delay in the construction of offshore facilities and falling new orders, which resulted in massive losses.