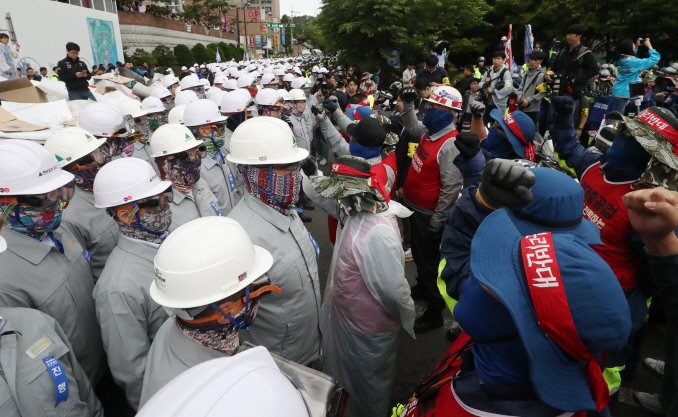 Unionized Hyundai Heavy Industries Co. workers confront the company’s other workers in front of a building in the southeastern city of Ulsan on May 31, 2019, as they stage a sit-in protest to impede the shipbuilder’s shareholders’ meeting the same day for the implementation of a split-up plan by the company for a merger with Daewoo Shipbuilding and Marine Engineering Co. (Yonhap)

SEOUL/ULSAN, May 31 (Korea Bizwire) — Shareholders of Hyundai Heavy Industries Co. on Friday approved the company’s split-up plan ahead of a proposed merger with a smaller local shipbuilder amid fierce opposition from its labor union.

The split is the first step in the process of Hyundai Heavy’s planned merger with Daewoo Shipbuilding & Marine Engineering Co. They are the world’s two leading shipyards.

In March, the country’s biggest shipbuilder signed a deal worth an estimated 2 trillion won (US$1.6 billion) with the state-run Korea Development Bank (KDB) to acquire Daewoo Shipbuilding, in which the KDB holds a controlling 55.7 percent stake.

“The split-up plan is aimed at enhancing Hyundai Heavy’s capabilities and value through the merger with Daewoo Shipbuilding and leapfrogging forward once again,” Hyundai Heavy President and Chief Executive Han Young-seuk said at a shareholders meeting held in Ulsan, home to Hyundai Heavy’s shipyards.

Despite the shareholders’ approval, Hyundai Heavy appears to be facing some hurdles before it can complete its merger with Daewoo Shipbuilding.

Hyundai Heavy’s union said it will seek legal action to nullify the shareholders’ decision, claiming the meeting didn’t follow the proper steps. The company shifted the venue for the meeting at the last moment as the union had occupied the site originally scheduled for the gathering.

The company has said it will guarantee job security even after the split-up. But unionized workers at Hyundai Heavy have been strongly opposing the plan, claiming the split will force the newly born Hyundai Heavy to inherit massive debts that will lead to massive job cuts.

Since mid-May, the union workers have staged partial and full-scale strikes at Hyundai Heavy’s shipyard in Ulsan, 410 kilometers southeast of Seoul, in defiance of the split-up plan.

The Korea Employers Federation (KEF) urged the union to collaborate with the company to survive tougher competition with Chinese rivals amid a slowdown in the shipping industry.

“Korean shipbuilders have competed with each other to win orders in global markets. Such competition resulted in lower contract prices. An escalating trade war between the United States and China is also a major worry for exporters. At this critical juncture, the merger will help the country’s biggest shipbuilder regain profitability,” the KEF said in a statement.

In addition to the union’s opposition, Hyundai Heavy has to obtain approval from the antitrust regulator. It also has to undergo a review process over the merger in 10 countries, as well as the European Union, since the tie-up of the two major shipbuilders could reshape the global shipbuilding landscape.

Hyundai Heavy and Daewoo Shipbuilding’s combined order backlog account for about 20 percent of the global total.