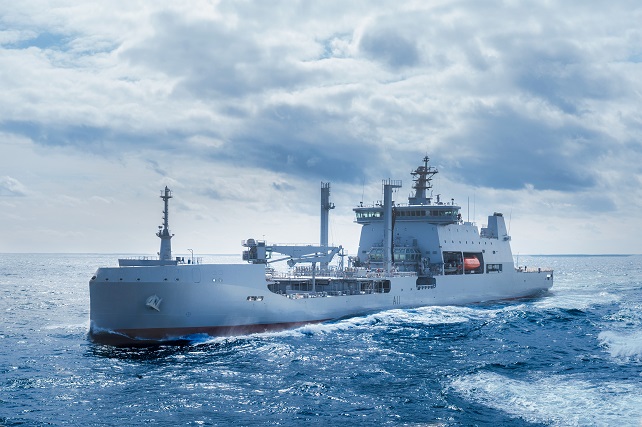 This file photo provided by Hyundai Heavy Industries Co. shows a warship for the Royal New Zealand Navy built by the shipbuilder.

Hyundai Heavy clinched an order for the warship in July 2016 from the Royal New Zealand Navy.

“Hyundai Heavy will beef up its presence in the overseas warship market on the basis of advanced technologies and its experience in the sector,” Korea Shipbuilding said in an emailed statement.

In October last year, Hyundai Heavy signed an agreement with the Navy on the LPX-II project, which aims to build a new versatile large-deck landing ship for short take-off and vertical landing fighter jets.

The shipbuilder is also pushing ahead with its plan to win an order to design the 6,000-ton class destroyers, called the Korea Destroyer Next Generation (KDDX), of the South Korean Navy.

The country’s arms procurement agency Defense Acquisition Program Administration (DAPA) will close bidding for the design of the destroyers on July 20.

In 2019, Hyundai Heavy’s warship sales accounted for only 8 percent of its parent group’s shipbuilding revenue of 13.3 trillion won (US$11.2 billion).

Hyundai Heavy has built about 80 warships, including the South Korean Navy’s destroyer King Sejong the Great.

The shipbuilder has been anticipating more orders from New Zealand, citing a deal signed in June last year by South Korea and New Zealand to boost cooperation in the military supplies field.