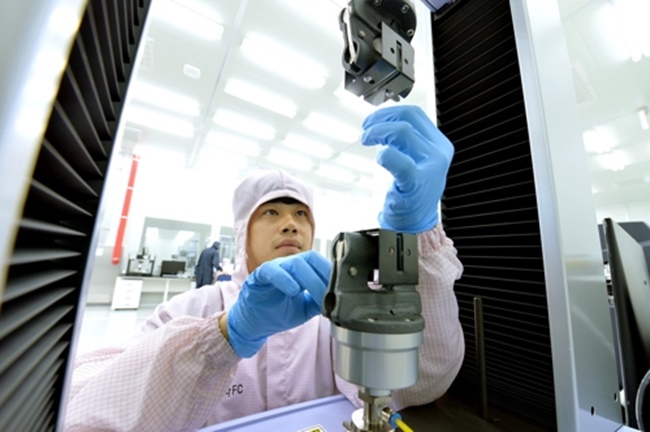 The company said the factory, located inside its existing eco-friendly vehicle parts complex in the central city of Chungju, is slated to start test operations in September. (Image: Hyundai Mobis)

The company said the factory, located inside its existing eco-friendly vehicle parts complex in the central city of Chungju, is slated to start test operations in September.

The 70 billion-won (US$62.2 million) plant has the capacity to produce 3,000 powertrain fuel-cell complete (PFC) modules per year, which ranks it among the top global players.

Hyundai Mobis added the company can raise the plant’s capacity to tens of thousands of PFC modules down the road, depending on market demand.

Fuel cell electric vehicles refer to those that use compressed hydrogen and a fuel cell to produce electricity that powers an on-board electric motor. Such vehicles release zero emissions and are quick to charge making them ideal for everyday use if there is sufficient charging infrastructure.

A Hyundai Mobis official said the company will ramp up efforts to improve its competitiveness in the fuel cell vehicle industry.

“The company will strive to secure its own technologies that can reduce the overall weight of the fuel cell system by around 10 percent and improve the power performance by 15 percent,” he said. “Hyundai Mobis is the only industry player that boasts an integrated production system for all key parts of fuel cell cars.”

Hyundai Mobis, a unit of the world’s fifth-largest automotive conglomerate Hyundai Motor Group, has been operating the eco-friendly vehicle parts complex since 2013.

Amid growing perception that hydrogen cars are the ultimate eco-friendly vehicle, several global automakers, including those from Japan and China, are scrambling to develop related technologies. Market watchers expect most global carmakers to enter the hydrogen car market after 2020, with the market size growing to 500,000 units per year in 2025.

South Korea’s top automaker Hyundai Motor Co., a Hyundai Mobis affiliate, plans to sell a new hydrogen fuel cell electric vehicle next year, which will have a range of 580 kilometers with a full tank of hydrogen.