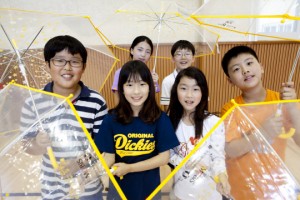 Hyundai Mobis has made transparent umbrellas since 2010 and distributed 100,000 of them every year to a total of 706 elementary schools all across the nation. (image:Hyundai Mobis)

SEOUL, June 4 (Korea Bizwire) - Hyundai Mobis announced on June 2 that it will give away 100,000 transparent umbrellas to elementary schools all across Korea, by drawing lots as part of the “2014 Transparent Umbrella Sharing Campaign.”

For starters, the executives and employees of the company visited Joong-Il Elementary School near its R&D center in Yongin in the southern outskirts of Seoul and delivered transparent umbrellas and road safety booklets to all of its 476 students.

The “Transparent Umberalla Sharing Event,” which is an exemplary effort of the automotive parts company to make contributions to society, is a campaign that promotes the use of see-through umbrellas which secure clear view in rain, especially for children who are often careless.

Hyundai Mobis has made transparent umbrellas since 2010 and distributed 100,000 of them every year to a total of 706 elementary schools all across the nation. It will give out 100,000 again this year, to 140 elementary schools.

The umbrellas that Mobis designed are made with light aluminum and fiberglass plastic so that they are durable and light-weighted. The frame and grip are also colored in bright yellow so that they are visible and strapped with a whistle for enhanced safety of children.

The Korea’s leading automotive parts and component maker have not only handed out the umbrellas to contribute to children’s safety, but tried to bring social awareness of children’s safety on the road by holding public events.

A marketing director at Hyundai Mobis said, “The campaign, which has been five years since launch, has raised social awareness on road safety for children on rainy days. We plan to develop many other programs to reinforce traffic safety for our children.”

On the other hand, Hyundai Mobis also looks to expand its campaign to overseas as they plan to deliver translucent umbrellas to elementary schools in Beijing and Jiangsu in China during this month.