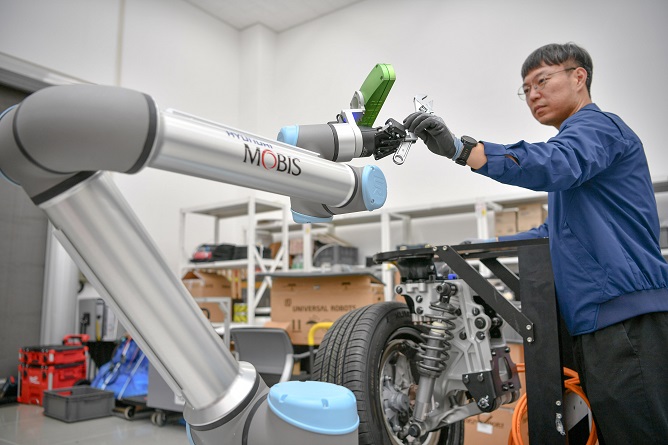 With articulated arms, the newly-developed mobile cooperative robot can perform tasks with other workers, while moving in self-driving mode in a factory or office environment.

Using its built-in cameras and LiDAR sensors, it can move forward, backward and sideways.

Thanks to its cameras and mobile arms, a variety of mobile services are possible, including arranging products on display shelves at stores and delivering coffee made by a barista to a customer’s table.

Hyundai Mobis said it also developed a logistics robot that can move freely between production lines and logistics warehouses, while delivering items and materials needed on-site.

With a height of 15.2 centimeters, the robot can be loaded with up to 200 kilograms of cargo, and has a lifting capability of up to 12 centimeters.

Using LiDAR, cameras and ultrasonic sensors, the robot can identify its own position within workplaces and supply materials through optimal routes while avoiding obstacles.