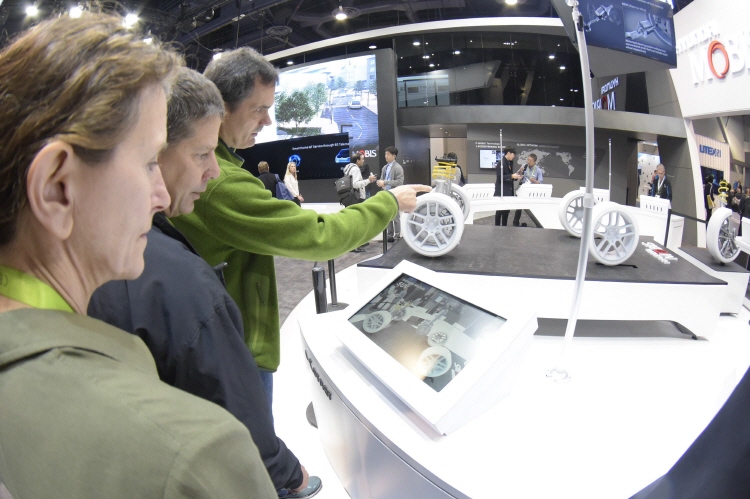 In this photo taken at the Consumer Electronics Show in Las Vegas in January, officials from a carmaker look around next-generation car technologies displayed at Hyundai Mobis’ booth. (image: Yonhap)

SEOUL, May 29 (Korea Bizwire) — Hyundai Mobis Co., South Korea’s largest auto parts maker by sales, has emerged as a key supplier of General Motors Co. after it secured a US$1.1 billion deal to provide auto parts for eight years, the company announced Tuesday.

The Detroit-based carmaker recently picked Hyundai Mobis as one of its 16 major suppliers of the year as the Korean company has supplied core auto components, such as integrated center stack (ICS), to a variety of GM vehicles since 2010, the company said in a statement.

Hyundai Mobis said the title of GM’s core parts supplier will help it win fresh orders, particularly in parts for technologically advanced vehicles, in the United States and other markets.

In 2018, the company expects to win $7 billion worth of orders globally on the back of higher demand from China. The order target is up from $6 billion achieved last year.

As the government-led drive to promote electric vehicles in China is pushing up the sale of more eco-friendly vehicles, the company said it will absorb some of the rising demand for high-end auto parts.