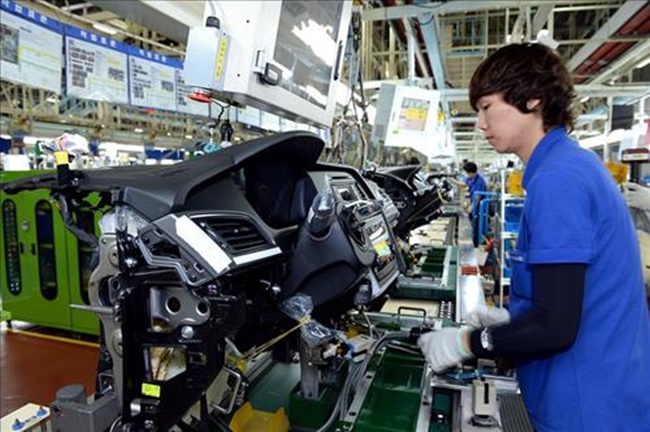 For the three months that ended on Sept. 30, net profit declined to 482.2 billion won (US$429 million) from 705.8 billion won a year earlier, the company said in a statement. (Image: Yonhap)

For the three months that ended on Sept. 30, net profit declined to 482.2 billion won (US$429 million) from 705.8 billion won a year earlier, the company said in a statement.

“The vehicle module and core component business from which the company earns about 80 percent of its overall sales was hit hard by declining demand from the neighboring country and the won’s strength against the Chinese yuan,” the statement said.

A strong won drives down the value of the yuan-denominated earnings when repatriated into the Korean currency.

Carmakers and auto parts makers were among the businesses most affected by the diplomatic row underway between Seoul and Beijing over the deployment of an advanced U.S. missile defense system, called THAAD, in South Korea.

Consumer sentiment in China turned against Korean products as Beijing has opposed the THAAD deployment arguing it could be used against it. Seoul has said the system is purely aimed at deterring missile threats from North Korea.