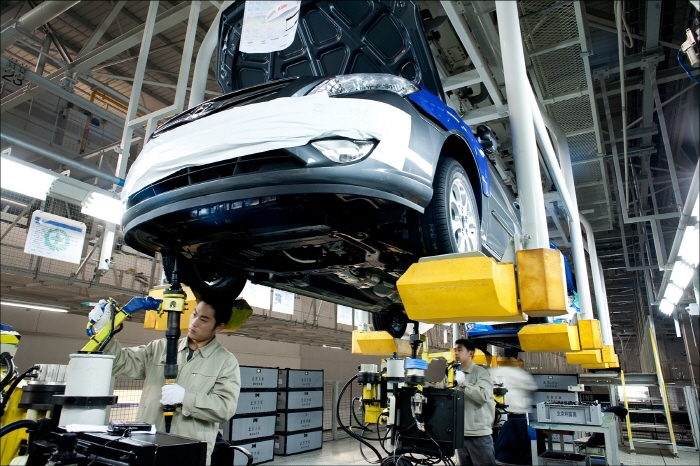 In the January-March quarter, Hyundai Motor Co. and its affiliate Kia Motors Corp. sold a combined 213,057 vehicles in the world’s biggest automobile market, sharply down from 440,514 units in the first quarter of 2015.

Hyundai and Kia vehicles have been struggling with weak sales in China as they responded late to rising demand for SUVs. They also face tougher competition with local rivals that offer relatively good models at lower prices.

Dealing a further blow to the carmakers, a diplomatic row between Seoul and Beijing over the deployment of an advanced U.S. missile defense system, called THAAD, in South Korea in 2017, drove down their sales in China.

The carmakers’ sales in China won’t likely rebound for the time being, according to analysts.

“A lack of competitive SUV models in their lineups hasn’t allowed Hyundai and Kia to rebound from a sales slump in the wake of the bilateral diplomatic tensions over THAAD. Their sales in China are not likely to recover in the short term,” Oh Dong-ryun, an analyst at Samsung Securities Co., said.

The carmakers’ slump continued last year with growth in their sales nearly stalled at 1,160,179 autos in the neighboring country.

As a result, Hyundai said it plans to stop production of the No. 1 Beijing plant with a capacity of 300,000 units later this month as its utilization rate recently fell below 50 percent.

South Korea’s biggest carmaker has three plants in Beijing, one in Changzhou and another in Chongqing. Their combined capacity reaches 1.65 million vehicles.

Kia said it is mulling producing electric vehicles at one of its three plants in China in a readjustment plan.

The maker of the Soul box car and the Sorento SUV is considering halting the production of existing models, such as the Sportage SUV and the localized KX7 SUV, and manufacturing EVs at the No. 1 plant in Yancheng, Jiangsu province, that produces 140,000 units a year, the company said.

Kia’s two other plants are also in Yancheng, with their combined capacity reaching 890,000 units.

Reflecting lower demand in China, Hyundai and Kia have set a conservative sales target of 7.6 million units in global markets this year. They sold 7.39 million units last year, down 2 percent from a year ago.

To bolster sales there, Hyundai plans to launch the all-new ix25 compact SUV, the battery-powered Kona subcompact SUV in China and the new Sonata sedan, with Kia planning to introduce the new K3 compact.

The automakers are also looking to strengthen their presence in Southeast Asia and other emerging markets.

Hyundai Motor currently operates a plant with an output capacity of 700,000 units in Chennai, India, and Kia is also building a plant in India that produces 300,000 units.

In January this year, Hyundai said it will also set up a joint venture with a Vietnamese company to boost sales in the Southeast Asian market.