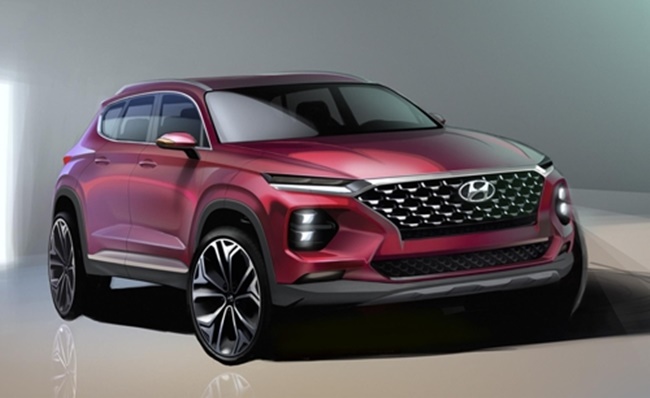 This image courtesy of Hyundai Motor shows the carmaker’s all-new Santa Fe SUV, which will launch next month in the domestic market. (Image: Hyundai Motor)

The first fully-revamped Santa Fe to be rolled out in six years comes as the carmaker badly needs a new SUV to drive up sales in major markets like the United States, where the demand for crossovers is on the rise.

“Hyundai Motor plans to launch the new vehicle in the U.S. market this summer, and the model to be available in the world’s most important market will be gasoline-powered,” a company official told Yonhap News Agency, without providing further details.

The new Santa Fe carries advanced technologies and premium options that have been used in luxury models, Hyundai Motor said in a statement.

“The company focused on making the Santa Fe a ‘human-centered’ vehicle that allows the driver and passengers to experience some advanced safety functions,” Kim Hyo-lin, director of the User Experience Planning Group at Hyundai Motor, said at a media preview event.

The technologies to be incorporated in the fourth-generation Sante Fe include advanced driver assistance systems and a host of safety features such as safe exit assist, rear occupant alert and rear cross-traffic collision avoidance assist systems, it said.

Hyundai said it will receive preorders from Feb. 7, before the car hits local showrooms in late February.

The midsized SUV’s prices and details will be released next month.

In 2017, Hyundai suffered declining sales in major markets such as China and the U.S. due to a diplomatic row and a lack of new models, respectively.

This year, the maker of the Sonata sedan and the Tucson SUV aims to sell a total of 4.68 million vehicles, slightly higher than the 4.51 million units sold the previous year.