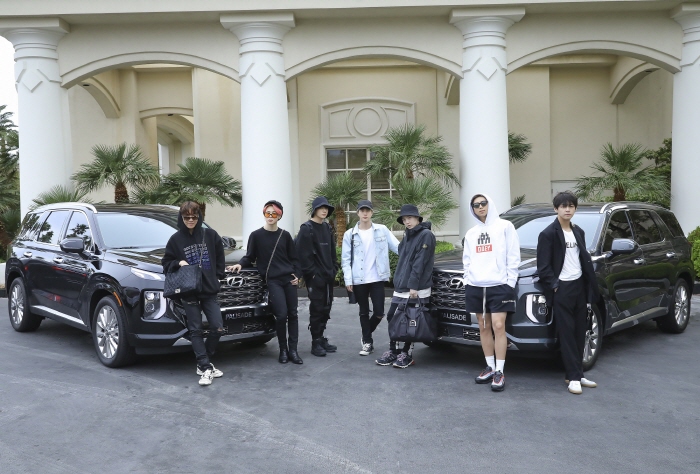 BTS members pose in front of a hotel in Las Vegas after arriving in a Palisade from Las Vegas McCarran International Airport. (image: Hyundai Motor Co.)

BTS began their trip in a Palisade to travel from Las Vegas McCarran International Airport to the 2019 Billboard Music Awards ceremony at the MGM Grand Garden Arena in the state on May 1 (U.S. time), Hyundai said in a statement.

The seven-member boy band, which serves as Hyundai’s global brand ambassador, is nominated for two awards in the Top Duo/Group and Top Social Artist categories.

Hyundai provided the Palisade to BTS to rouse global interest before it launches the flagship SUV in North American markets this summer.

The maker of the Sonata sedan and the Santa Fe SUV reported a 2.5 percent on-year drop in U.S. sales to 198,000 vehicles in the January-March quarter.

Its global sales in the first quarter also fell 2.7 percent on-year to 1,021,377 units due mainly to a lack of competitive SUV models.

Hyundai launched the all-wheel drive, three-row Palisade in the domestic market in December after launching the all-new Santa Fe in February.

Hyundai has improved its SUV lineup, now composed of the subcompact Kona, compact Tucson, midsize Santa Fe and Palisade, after years of requests from markets for it to reduce its heavy reliance on sedans.