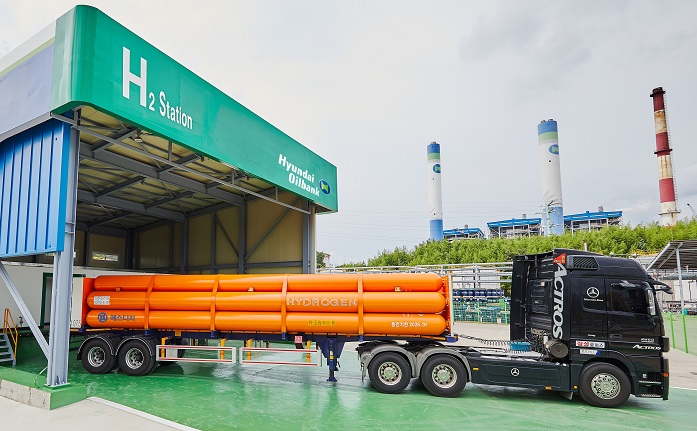 The refinery unit of shipbuilding giant Hyundai Heavy Industries Holdings said it will establish the fuel cell separator facility in Seosan, about 120 kilometers south of Seoul, and begin a test-run within this year.

The company plans to collaborate with Hyundai Motor Co., the maker of Nexo SUVs and Xcient trucks, on developing fuel cell separators suited for the automaker’s fuel cell vehicles and roll out products in 2023.

The separator is one of the key components of a hydrogen fuel cell stack, which is assembled by stacking hundreds of unit cells composed of cathodes and anodes.

The separator serves as a channel for supplying hydrogen to the anode and oxygen to the cathode, and also functions as a support between unit cells constituting the stack.

As the next step, Hyundai Oilbank said it will develop separators for fuel cell electrolytes beginning next year and work on fuel cell systems for vehicles, buildings and heavy equipment.

The company aims to raise 500 billion won (US$427 million) in annual sales from the hydrogen fuel cell business by 2030 in line with its parent’s plan to foster the hydrogen-related business as its new growth engine.

Hydrogen is considered an environmentally friendly alternative to fossil fuels, as vehicles and ships propelled by the resource only create water in the process of generating power.

Under the goal, Hyundai Oilbank has been building a high-purity refining facility in Daesan that will convert “blue” hydrogen into fuel for vehicles.

When the facility comes online, it will be able to produce up to 3,000 kilograms of hydrogen a day, enough to fuel about 600 Hyundai Motor’s Nexos, the firm said.

It also plans to establish 180 hydrogen fueling stations by 2030 to provide infrastructure for hydrogen mobility.

Hyundai Oilbank has recently selected lead managers to prepare for its initial public offering on the Seoul bourse, its third attempt following the first in 2012 and the second in 2017.