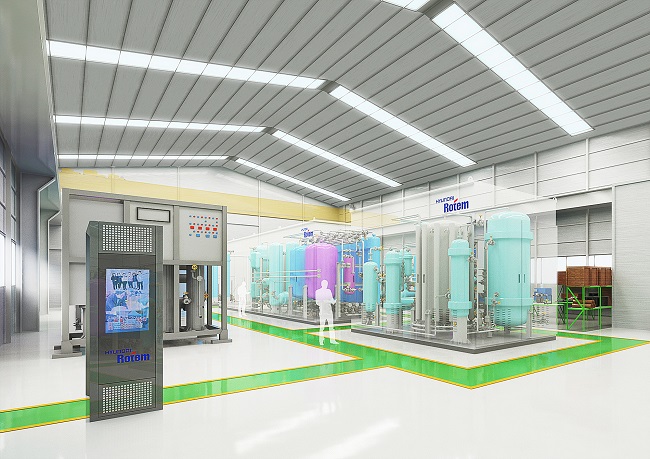 This rendering, provided by Hyundai Rotem, shows the company’s hydrogen reformer plant to be built at its R&D center in Uiwang, just south of Seoul.

Hyundai Rotem will establish a hydrogen reformer production facility at its research and development complex in Uiwang, just south of Seoul, with a plan to produce 20 reformers a year starting from October, the company said in a statement.

A hydrogen reformer, equipment that extracts hydrogen from natural gas, is a core part of a hydrogen charging station.

Twenty hydrogen reformers will have a combined output capacity of 4,700 tons of hydrogen, which can fully fill up 850,000 units of Hyundai Motor Co.’s Nexo hydrogen fuel-cell electric vehicle, the statement said.

Hyundai Rotem said it will expand the reformer plant depending on market demands.

In June, the company said it will venture into the hydrogen infrastructure market to secure a new growth driver.

It aims to achieve sales of 110 billion won (US$92.4 million) in the hydrogen charging facility market in 2022 and 350 billion won in 2025 amid growing awareness of hydrogen-powered vehicles and rising demand for environmentally friendly vehicles.

The hydrogen energy market is expected to grow to 3,000 trillion won in 2050, accounting for 18 percent of global energy demand, the company said, citing a McKinsey report titled “Hydrogen scaling up, 2017.”

In January, South Korea announced it will have an accumulated 2.9 million hydrogen vehicles running on the street by 2040 and will increase the number of hydrogen charging stations to 310 by 2022 and to 1,200 by 2040 from the current 37 across the country.

Hyundai Rotem is an affiliate of Hyundai Motor Group, which plans to invest 7.6 trillion won in hydrogen car-producing facilities and related research and development activities by 2030.

The group plans to churn out 500,000 hydrogen vehicles in 2030 as it moves to morph into a future mobility solutions provider. A hydrogen car is considered to be environmentally friendly since it emits only water vapor as it generates electricity.