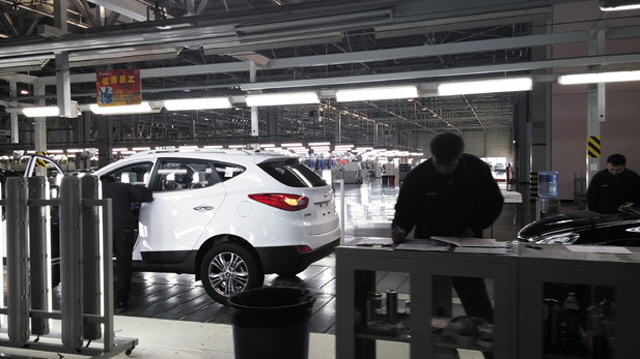 The assembly line of a Hyundai Motor’s plant in Beijing. (Yonhap)

SEOUL, Feb. 3 (Korea Bizwire) — Hyundai Motor Co. said Monday it will inevitably suspend some vehicle assembly lines at its domestic plants due to shortages of Chinese-made auto parts in light of the spreading coronavirus outbreak.

Vice President Ha Eon-tae, head of the main plant in Ulsan, said that it is inevitable that the company will suspend the operation of some lines at its plants, as South Korean parts suppliers in China are suspending output due to the Chinese government’s restrictions on plant operations amid the coronavirus scare, a company spokesman said.

“The company and the union are in talks to decide on what production lines at local plants will be suspended to cope with shortages of auto components from China,” he said in an email message sent to workers at Hyundai Motor’s plant in Ulsan, about 410 kilometers southeast of Seoul.

Meanwhile, Kia Motors Corp., which is 34 percent owned by Hyundai, has started reducing output at its plants in Hwaseong, 160 km south of Seoul, and Gwangju, 330 km south of the capital, due to lack of wiring and other parts from the Korean suppliers operating in China.

Hyundai and Kia, which together form the world’s fifth-biggest carmaker by sales, expected shortages of wiring and other auto components from the suppliers.

Hyundai already canceled overtime work over the weekend to produce the flagship Palisade sport utility vehicle at the Ulsan plant in an initial countermeasure to manage its parts inventories.

The fallout from the virus could deal a further blow to Hyundai and Kia, which have been struggling with declining sales in the world’s biggest automobile market in the past three years.

In China, the carmakers’ sales remained weak due to the lingering impact of political tensions between Seoul and Beijing over the deployment of an advanced U.S. missile defense system, called THAAD, in South Korea in 2017.

In April last year, Hyundai stopped production at one of its five plants in China, and in May, Kia shut down one of its three plants there due to lower demand.