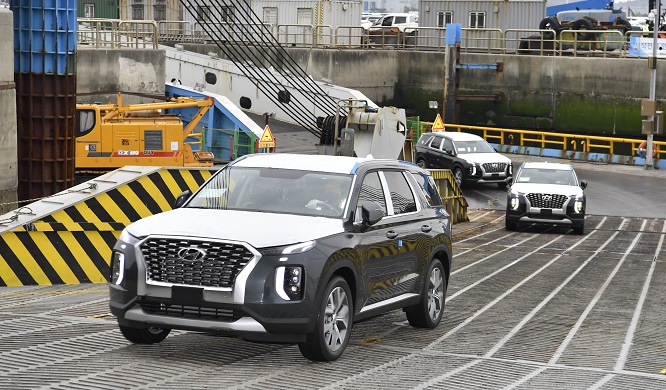 This photo taken on May 15, 2021, and provided by Hyundai Motor shows Palisade SUVs that will be exported to the Democratic Republic of Congo at a port in Pyeongtaek, 70 kilometers south of Seoul.

Of the 500 Palisades, Hyundai shipped 250 units to the African country on Saturday, with the remaining 250 set to be delivered in late July, the company said in a statement.

The export volume is sharply up from 45 vehicles the company exported to the central African country last year, it said.

Hyundai expects the Palisade shipments to help it enter the central African markets that are dominated by Toyota Motor Corp. and other Japanese brands.

Most of the Palisade SUVs will be used for business purposes in Congolese public organizations, the statement said.

The maker of the Sonata sedan and the Santa Fe SUV has made efforts to build a presence in the Africa and Middle East markets, such as by exporting the Nexo hydrogen fuel-cell electric car and the Elec-city hydrogen bus to Saudi Arabia in September.