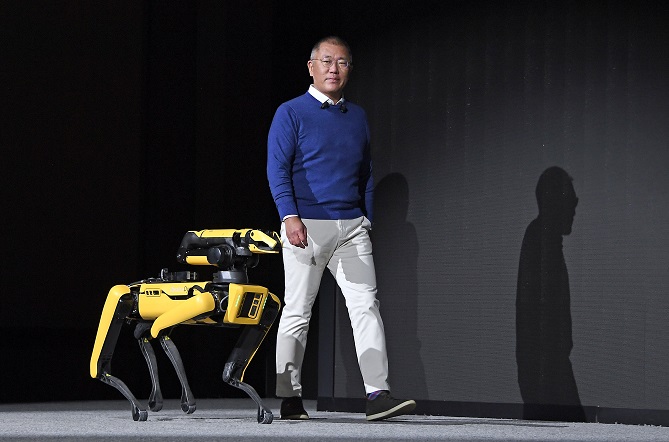 Hyundai Motor Group Chairman Euisun Chung enters a stage, along with Boston Dynamics’ Spot robot, to announce the group’s “metamobility” vision at CES 2022 on Jan. 4, 2021, in this photo provided by the group.

SEOUL, Aug. 12 (Korea Bizwire) — Hyundai Motor Group said Friday it will spend US$424 million to build an artificial intelligence (AI) research center in the United States to bolster its edge in robotics technology, an area it cites as a key future growth driver.

The institute will “invest resources across the technical areas of cognitive AI, athletic AI and organic hardware design, with each discipline contributing to progress in advanced machine capabilities,” Hyundai said in a release on the website.

Hyundai Motor Group, led by Chairman Euisun Chung, has heavily been investing in the development of automotive software and related mobility technologies, including Software Defined Vehicles (SDVs), a concept that the vehicle’s software capability will define the quality of the car and driving.

In a separate announcement, Hyundai said it will also establish a new software center in South Korea in an effort to accelerate efforts toward an expansion into self-driving, electrification and other advanced auto technologies.

As part of the plan, Hyundai said it has recently acquired 42dot, a Seoul-based autonomous driving software and mobility platform startup, for 274.6 billion won (US$211.1 million).