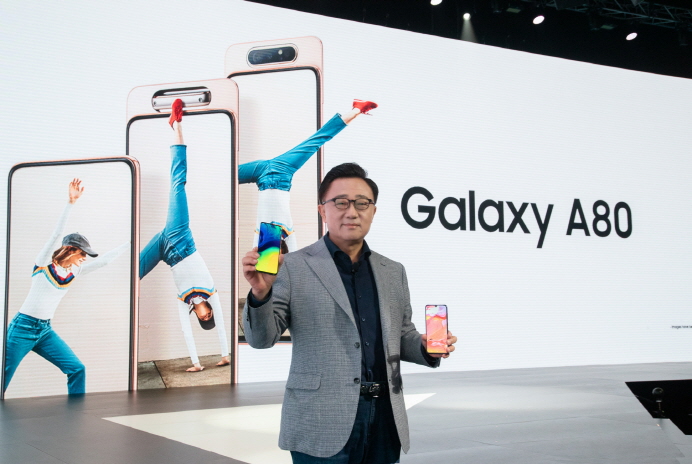 DJ Koh, the head of Samsung Electronics Co.’s mobile divisions, presents the Galaxy A80, a mid-range smartphone with a rotating camera system, during an Unpacked event held in Thailand on April 10, 2019. (Yonhap)

SEOUL, Apr. 11 (Korea Bizwire) — Samsung Electronics Co. said Thursday it has showed off its latest mid-range Galaxy A series with its first rotating camera in Thailand to target tech-savvy consumers in the Southeast Asian nation.

The South Korean electronics giant unveiled the Galaxy A80 with a 6.7-inch full screen design without a notch, which was made possible with its rotating camera system that flips around for different modes.

It packs a 48-megapixel main camera, as well as a 8-megapixel ultrawide and a time-of-flight sensor, which enables facial recognition and depth mapping for better selfies, Samsung said.

The phone has a 3,700 mAh battery, 8 GB of RAM and 128 GB of storage, supporting an on-screen fingerprint scanner.

Samsung has focused on improving camera functions in its smartphones of all ranges as more people consider picture quality as one of the most important features when buying new devices.