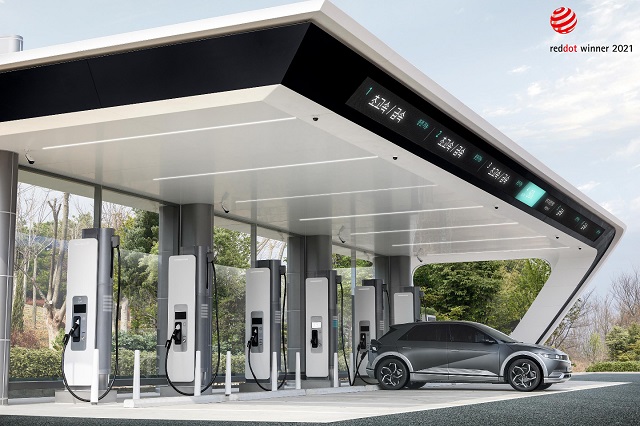 This file photo provided by Hyundai Motor Group shows its own charging station under the brand name of “E-pit.”

Hyundai Motor Group will provide customers of its EV models with fast and convenient services at the E-pit charging stations. They can charge 80 percent of their EV battery capacity within 18 minutes on a single charge, the company said in a statement.

Hyundai Motor Co. and Kia Corp., two key affiliates of the automotive group, plan to strengthen their EV lineup for a share in the rapidly growing EV market.

The maker of the Sonata sedan and the Palisade SUV also plans to introduce the IONIQ 6 midsize sedan in 2022 and the IONIQ 7 large SUV in 2024. It will begin using alphanumeric names like its bigger rivals, such as BMW, whose models are named Series No. 1-8.

Kia plans to unveil the EV6, its first dedicated all-electric model built on the E-GMP platform, later this month.

Kia aims to launch seven pure electric models by 2026, and the EV6 is the first model of the planned EV-only lineup.