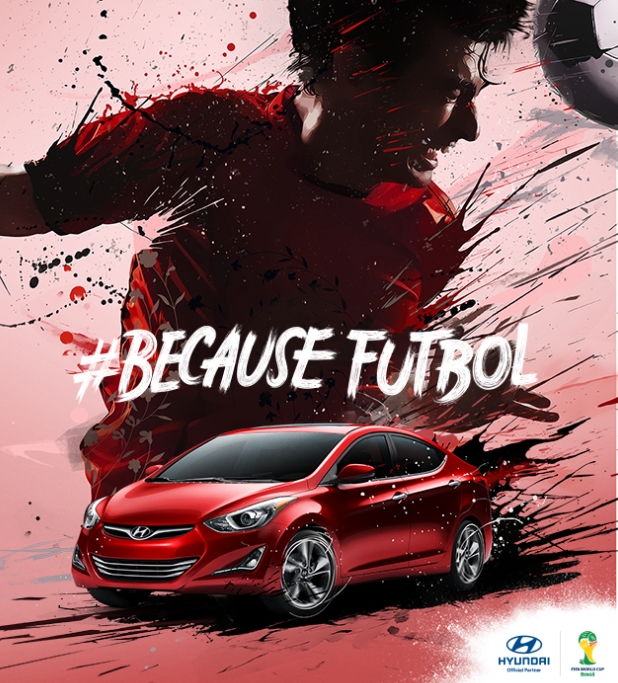 #BecauseFutbol has generated more than 17 million impressions on Twitter alone and the engagement rate of 9.98 percent has greatly surpassed Twitter’s auto benchmark of 1-2%. (image credit: #BecauseFutbol)

FOUNTAIN VALLEY, Calif., Jul. 9 (Korea Bizwire) – The 2014 FIFA World Cup is being hailed as one of the greatest ever – both on and off the field. The tournament is dominating the social universe as one of the most talked about events on Twitter of all time with more than 300 million Tweets related to #WorldCup. With just three games until the coveted Cup finds its next home the drama, excitement and fan passion lives on #BecauseFutbol.

Hyundai currently has a 36 percent share of voice[1] against other top branded hashtags for the World Cup, making it the top branded hashtag among World Cup conversations on Twitter. #BecauseFutbol has generated more than 17 million impressions on Twitter alone and the engagement rate of 9.98 percent has greatly surpassed Twitter’s auto benchmark of 1-2 percent.[2] Similarly, BecauseFutbol.com continues to extend Hyundai’s celebration of fan passion beyond the big screen with more than 200,000 interactions[3], and counting.

“Great campaigns on Twitter are built around great conversations in the moment.” said Adam Bain, president of global revenue at Twitter. “Hyundai has been amazing at rallying the passions of World Cup fans everywhere on Twitter, and then extending that conversation with really compelling content.”

“#BecauseFutbol has really taken on a life of its own and continues to gain momentum as the tournament continues,” said Steve Shannon, vice president, Marketing, Hyundai Motor America. “In just a matter of weeks, the response to #BecauseFutbol has been amazing; outranking other branded hashtags from leading FIFA advertisers including Adidas, Nike, Budweiser, and Volkswagen to name a few. It has quickly gained popularity, organically dominating conversations around the World Cup. It’s exciting to see a simple phrase transform into a trend that relates to fans and fits naturally with the phenomenon of fan passion.”

“World Cup fans are looking for ways to share team spirit and passion,” adds Shannon. “Our campaign goes beyond driving social conversation around #BecauseFutbol, but also provides fans with a platform where they can share artistic expressions of their passion and interact with like-minded soccer fans.”
Built on the Tumblr platform, BecauseFutbol.com connects, inspires and engages fans with unique content and tools developed by dozens of leading Tumblr artists and content creators. Since its launch BecauseFutbol.com has attracted 28,613 followers, 17.7 million impressions and 465,444 engagements.[4]

Hyundai Motor America tapped INNOCEAN USA’s StoryLab to create, manage and optimize branded content for the World Cup. “While most brands are celebrating the players and teams, it made natural sense to connect Hyundai with fan passion,” said Uwe Gutschow, vice president, INNOCEAN USA. “To this end we’re creating more than 150 original pieces of content. #BecauseFutbol was created as the perfect excuse fans could own to express their love for the game.”
The 2014 FIFA World Cup creative theme of celebrating fan passion is a nod to what being a true fan really means. Hyundai’s ranking as No. 1 in customer loyalty for the fifth consecutive year, according to research consultancy, Brand Keys, served as the creative inspiration. The complete 360˚ integrated marketing platform, complete with two all-new television spots feature the all-new 2015 Sonata, highlights the emotional love of the game and aims to inspire fans with two simple words – “#BecauseFutbol.”

The increased social chatter around #BecauseFutbol and positive response to the commercials translate to new highs on Hyundai.com and dealership websites. Data obtained just two weeks into the World Cup revealed that weekly shopper traffic to 2015 Sonata model pages on Hyundai.com increased 86 percent while Hyundai dealer sites also benefited with a 108 percent spike in views of 2015 Sonatas in-inventory.

2014 marks Hyundai’s fourth consecutive year since 2002 as the official vehicle sponsor of the World Cup. Creative was developed by Hyundai’s agency of record, INNOCEAN USA.

[4]Source: Tumblr Analytics – Captures data from 4/25/14 (start of campaign) – 7/7/14. Impressions are counted when a post is in the view of a user. Engagements are counted as likes, reblogs, follows and clicks.