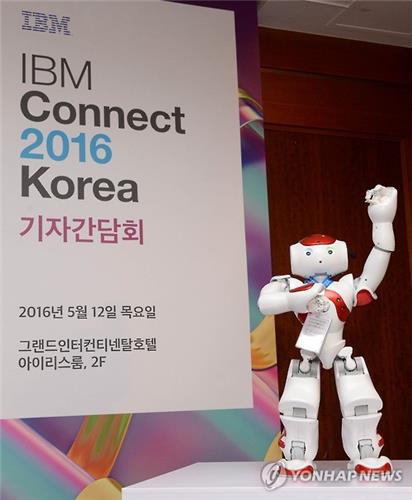 The New York-headquartered company is exploring the local market for its “blockchain,” a ledger system enabling quicker and more secure digital transactions. Made famous as the technology used by bitcoin, the system is especially applicable to the banking and insurance industries, according to the sources.

IBM announced a new initiative in October last year, IBM Cognitive Business Solutions, which builds on its success with the Watson platform.

“South Korea is the appropriate testbed for advanced AI business,” an industry official said. “IBM and other global IT firms may compete for market presence in South Korea.”

The company is scheduled to release the Korean-language version of its IBM Watson AI platform early next year working together with South Korea’s SK Holdings C&C, its partner in the cloud computing business. In a prelude, it displayed a Watson-powered robot called Nao-mi during a company promotional event on Thursday in Seoul, which delivered short greetings in Korean and danced to the famed song “Gangnam Style” by Psy.

IBM is discussing a public service project with South Korea’s environment ministry to use Watson for forecasting microdust levels, the sources said. The AI platform would be used to analyze big data on energy consumption at selected zones to predict the level of fine dust and also suggest the means to prevent it. The service is already in use in China.

The U.S. company is also in talks with Samsung SDS for tie-ins with security solutions in the energy and utilities business, the sources said.