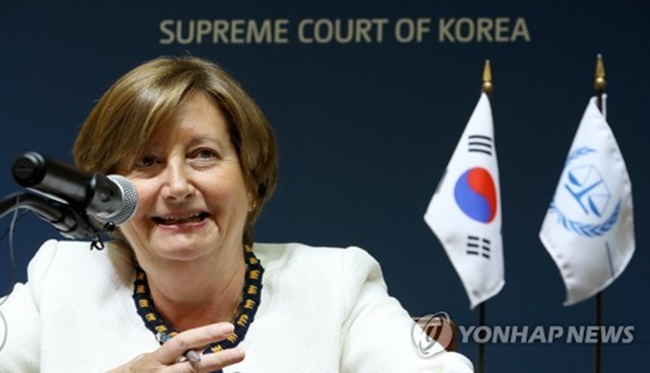 Silvia Fernandez de Gurmendi, president of the International Criminal Court (ICC), speaks about North Korea’s human rights violations during a press conference at the Supreme Court in Seoul on April 4, 2017. She came to Seoul to attend a high-level ICC meeting. (image: Yonhap)

SEOUL, April 4 (Korea Bizwire) – The chief of the International Criminal Court (ICC) said Tuesday she will discuss with Malaysia the murder case of North Korean leader Kim Jong-un’s half brother.

Silvia Fernandez de Gurmendi made the remark during a press briefing at the Supreme Court in southern Seoul during her visit to attend the ICC’s high-level regional seminar.

Kim Jong-nam was killed on Feb. 13 at an airport in Kuala Lumpur by two Asian women, who allegedly smeared the banned chemical weapon VX nerve agent on his face.

Malaysian police said that eight North Koreans are suspected of being involved in the killing. North Korea claimed that Malaysia colluded with South Korea to manipulate the probe.

The judge said she will discuss the issue with the Malaysian government after she is done with her schedules in South Korea.

For a case to be brought to the ICC, either the country where the crime took place or where the person who committed the wrongdoing should be a party that signed the Rome Statue which the court was established upon, she said.

Both North Korea and Malaysia did not take part in the adoption of the statue.

Still, the case can be referred to the world judicial body if the U.N. Security Council brings it to the court, the president added.