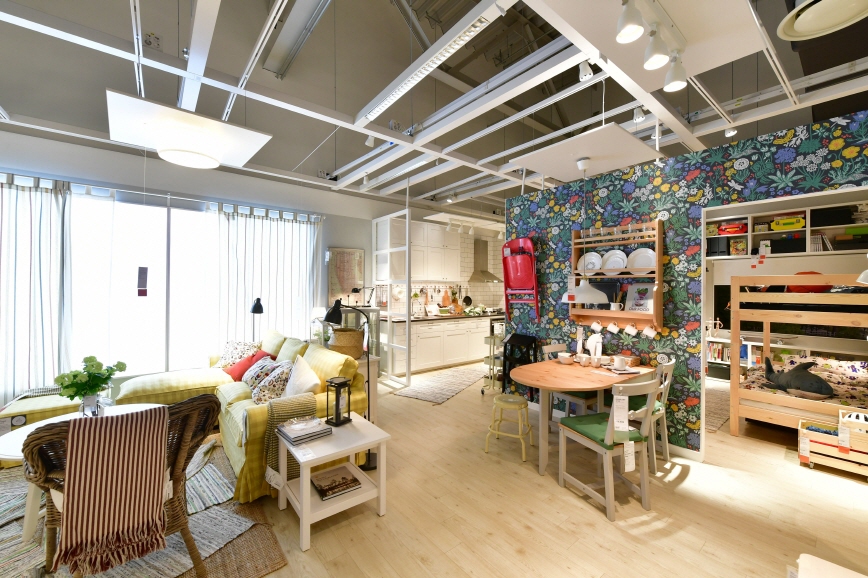 IKEA said it has prepared 42 room-sets in the new store which opened on Oct. 19. (image: IKEA Korea)

The new outlet in Goyang in the northwestern outskirts of Seoul is located on the second and third floor of a four-story building. A separate outlet mall run by South Korean retail giant Lotte is located in the first floor and the first basement level of the same building.

“We are excited to open our doors and offer better accessibility to the people in Seoul and northern metropolitan area,” IKEA Goyang Store Manager Cecilia Johansson said.

Fierce competition to grab customers in the region is expected, as Shinsegae, a major retailer here, opened its third all-in-one shopping complex in the same city earlier in August.

Starfield Goyang, a four-story building with two underground floors, is equipped with more than 560 brand shops, along with over 100 restaurants and other places for leisure activities.

Shinsegae Group Vice Chairman Chung Jae-yong has said IKEA should also be subject to the new regulation on multi-shopping complexes pending at the parliament to limit their business hours to protect struggling mom-and-pop shops.

Andre Schmidtgall, the chief retail manager of IKEA’s Korean unit, however, repeatedly said there is no reason for the law to be applied to the company, which only sells furniture unlike other multi-shopping complexes run by major retailers.

Under the Distribution Industry Development Act, big-box discount chains operated by giant retailers are already forced to close their shops twice a month on Sundays and public holidays since 2013.

Following the controversy, the government recently said it will review the necessity of a new law to regulate large-scale specialty stores based on their impact on small retailers.

During the 2017 fiscal year, IKEA’s first Korean store in Gwangmyeong, southwest of the capital, recorded 365 billion won in sales. IKEA plans to run six stores and e-commerce in South Korea with more than 4,000 employees by 2020, it said.