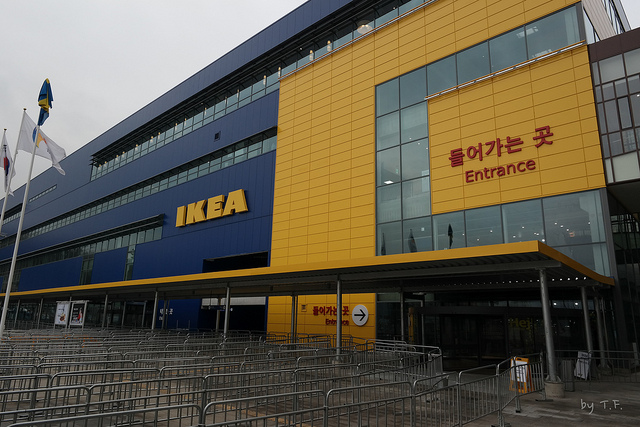 According to IKEA’s assessment, through the first month of operation in Korea, it expanded the market base for home furnishing, which was previously unfamiliar in Korea. (image: TF-urban/flickr)

GWANGMYEONG, Korea, Jan. 22 (Korea Bizwire) – IKEA Korea was embroiled in  controversies over its perceived high pricing policies and its map favoring Japan even before opening its first shop in Korea. However, one month after opening it’s first store in Korea, the business is a resounding success.

On January 21, IKEA Korea welcomed its 1 millionth guest at its only shop in Gwangmyeong. On average, IKEA attracts 35,000 visitors on weekends and 25,000 on weekdays. As of January 20, sales had reached 18 billion won (US$16.6 million) since the opening.

An official at IKEA Korea said, “In the early phases after the opening, there were lots of visitors who just came to see for their curiosity. Now, the number of actual purchasers is increasing.”

IKEA assesses the first month’s outcome as exciting. In 2013, IKEA sold 40 trillion won worth of products in its 345 shops worldwide. Compared to its average monthly sales per shop of 9.7 billion won, IKEA’s Gwangmyeong shop sold almost twice as much.

According to IKEA’s assessment, through the first month of operation in Korea, it expanded the market base for home furnishing, which was previously unfamiliar in Korea. By expanding this base, it solidified its foundation for more visitors and sales growth.

In fact, visitors are purchasing more household goods and small furniture rather than big furniture like bookshelves or beds. The most favored items were cushions, bed sheets, bedside tables and small storage closets which are priced less than 100,000 won.

The IKEA official said, “Korean consumers choose our products as a result of the high quality and low price. They choose us as we provide a variety of home furnishing products which cannot be found at other shops in Korea.”

Meanwhile, despite the successful sales results, there is still room for improvement. First of all, as the number of visitors and traffic greatly exceeded expectations, severe traffic jams have been a problem, leading to a warning from city authorities. Although the traffic has gotten better, parking spaces are still in short supply. Also, visitors have been complaining about the lack of resting places, and IKEA’s self-service checkout system.