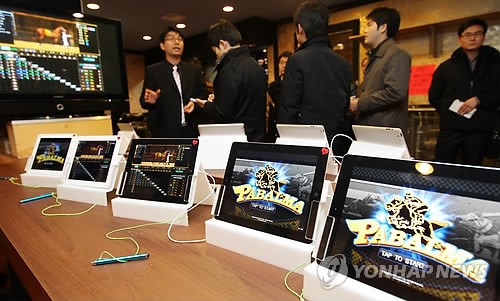 The app rooms are taking advantage of loopholes in the game listing policies of different app markets. (image: Yonhap)

SEOUL, March 24 (Korea Bizwire) – Tablet PCs offer mobility and connectivity benefits compared to computers, with their small size not standing in the way of impressive hardware specs. However, there is also dark side to the Tablet PC world, with pervasive online gambling that is becoming especially rampant in Korea.

On March 23, Jungbu Police Station in Ulsan, a southeastern industrial city, announced that it indicted the operator of an online gambling house surnamed Yoo on charges of violating the Game Industry Promotion Act. Yoo ran a gambling house or “app room” by renting out 79 tablet PCs installed with gambling apps.

Yoo registered her business as a PC room, but in fact offered gambling apps not classified by the Game Rating and Administration Committee (GRAC). Using the tablets PCs, Yoo sold game points to customers, and made large ill-gotten profits.

A police officer said, “App room owners make ill use of tablet PCs as they are easier to hide than PCs during police searches. As online gambling is rampant nationwide, we will continue the crackdown against illegal app rooms.”

The app rooms are taking advantage of loopholes in the game listing policies of different app markets. Under normal circumstances, all games should be rated by the GRAC before their release.

However, apps in open app markets are an exception. Developers can decide ratings for their games, and companies like Google or Apple review and register them in their markets. The self-rating policy exclusively for game apps was introduced in 2011 to promote the game industry.

Under the current conditions, app room owners are making money exchanging game points while offering tablet PCs that have gambling apps pre-installed, but the GRAC cannot control the open app market due to lack of manpower. Only two staffers are tasked with managing more than 150,000 game apps in the market.