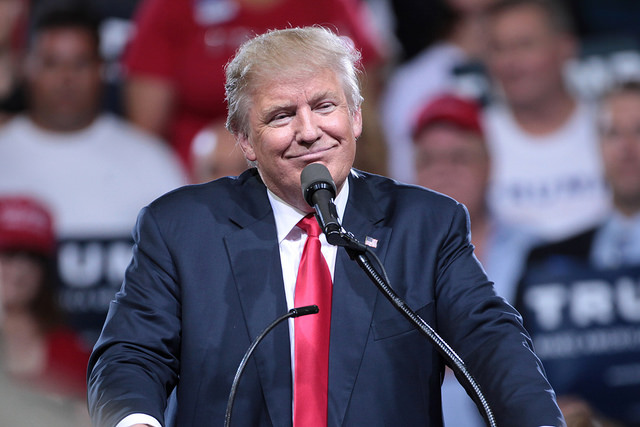 Business wise, Daewoo Construction & Engineering, the former construction affiliate of Daewoo Group, is the only Korean company that has a history with the president-elect. (image: Flickr/ Gage Skidmore)

SEOUL, Nov. 10 (Korea Bizwire) – The exhausting, polarizing race for the White House has finally ended, and to the world’s surprise, Donald Trump will become the 45th President of the United States.

The result was a heavy blow to a majority of Koreans, the country’s financial market, and political circles, as the now president-elect made several remarks during his campaign that could pose serious consequences to the South Korean economy.

But now that he is to assume the White House in just over two months, Korea must seek ways to maintain its long-time alliance with the superpower that will now be led by Trump.

Unfortunately, unlike with Hillary Clinton, hardly any connections exist between those in Korean political or diplomatic circles and the president-elect or his close advisors.

The same applies for business circles.

“I have not yet heard of anyone with any extensive connections or relationships with Mr. Trump,” said an official from the Federation of Korean Industries. “Now that he is the president-elect, we expect corporations to start making contacts with his party to establish new ties.”

There are, however, a few industry moguls who have better relations with Edwin Feulner, the former president of the conservative think tank The Heritage Foundation, who worked as part of the transition team for Trump’s campaign.

Fuelner, who has been pretty much the only pro-South Korea member of the Trump Camp, is also an expert in North Korean affairs, making frequent visits to South Korea, two or three times every year.

Lee Jae-yong, vice chairman of Samsung Electronics; Kim Seung-youn, Hanwha Group CEO; and Chung Mong-joon, chairman of the ASAN Foundation are said to have built relationships with Feulner over the years.

His last visit here was in October, during which he met the Hanwha CEO, discussing economic ties and the state of affairs of Northeast Asia. It is rumored that Kim made requests for “further development of the Korea-U.S. alliance amid growing provocations from the North.”

Business wise, Daewoo Construction & Engineering, the former construction affiliate of Daewoo Group, is the only Korean company that has a history with the president-elect.

Their ventures go way back to 1997 when they agreed to jointly build the Trump World Tower in New York City. The luxury residential skyscraper was finished in 2001.

Both parties entered into another agreement in 1999 for a Daewoo E&C construction project in Korea, after a company executive suggested using the name “Trump” for its new luxury apartments.

“The chief Daewoo architect and the head of the New York office briefed Mr. Trump in person on the building design and service facilities, and got the approval to use the name,” said a former official who took part in the project. “The deal wasn’t hard to reach as the two parties had already collaborated together in New York (for Trump World Tower).”

Seven apartment complexes have since been built across Korea under the Trump World brand, for which the company is believed to have paid $6 to 7 million in licensing fees.

Trump has visited Korea twice: in June 1998 upon invitation from Daewoo; and in May 1999 to promote the first Trump World in Yeouido, Seoul’s central political and business district.

“Korea’s real estate market has a very attractive side to it,” he said during his second visit.

And although he said he “would like to invest in the local market,” no actual investment took place by his businesses.