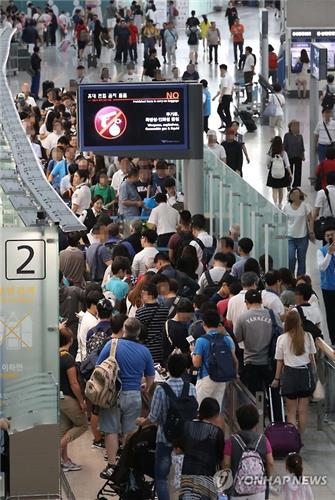 Photo shows a crowd of people lining up at the departure lobby of Incheon International Airport on July 22. (image: Yonhap)

Incheon airport, located west of Seoul, reported a total of 1,020 takeoffs and landings on Sunday. The number of passengers also reached a record high, hitting 188,263, as the peak summer season began, according to Incheon International Airport Corp. (IIAC). It said this is the highest number since the airport opened to passengers in March 2001.

The daily average number of operations has been constantly rising from 312 when Incheon airport first opened to 901 as of late June this year, the IIAC said. This translates into an average annual increase of 7 percent.

There is a total of 30 airports in 14 countries that operate more than a 1,000 takeoffs and landings per day on average, according to the airport operator. Excluding the United States, which has a lot of domestic flights, the number dips to 15 in 13 countries.

“We are putting efforts toward establishing a safe and efficient air transportation environment, by actively collaborating with nearby countries,” an IIAC official said.

Incheon airport is South Korea’s No. 1 air traffic hub and one of the busiest in Northeast Asia. Since its opening, it has won a string of excellent service awards.