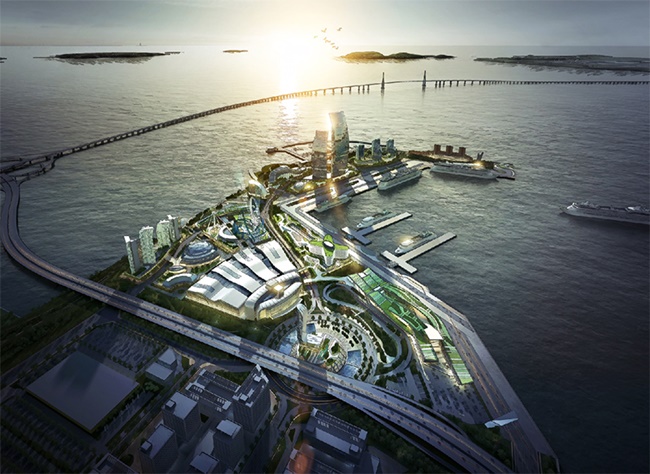 With the infrastructure construction of one of the two parts of Golden Harbor complete, the other half, occupying 216,000 square meters, will be home to convention centers, condominiums and high-end resorts when it is completed in 2019. (Image: IPA)

INCHEON, Nov. 24 (Korea Bizwire) – The Incheon Port Authority is ramping up efforts to attract investment at its new culture and tourist complex dubbed Golden Harbor, ahead of the opening of a new international ferry terminal at the Port of Incheon.

The Incheon Port Authority (IPA) said on Thursday that the new Golden Harbor ferry terminal project covering 429,000 square meters of land is well underway, and new plans have also been announced to rearrange the placement of some facilities and bring changes to the original development plans.

Under the new development proposals, one of the largest sites making up Songdo International Business District will be divided into three sections as part of efforts to attract investment more effectively, the IPA said.

With half of Golden Harbor divided into a total of six sites, IPA officials believe access to each area for investors will improve, generating more investment projects in the region such as a shopping mall, a hotel, and an officetel, to name a few.

When the revised development plan receives approval from the Incheon Free Economic Zone Authority, the IPA will work in collaboration with government branches such as the Public Procurement Service and the Korea Asset Management Corporation to develop an international bidding process for the new ferry terminal, which is set to open in 2019.

With the infrastructure construction of one of the two parts of Golden Harbor complete, the other half, occupying 216,000 square meters, will be home to convention centers, condominiums and high-end resorts when it is completed in 2019.

Golden Harbor, the latest project by the IPA, is a multi-purpose culture and tourist complex, three sides of which are facing the sea, presenting a memorable marine experience to both international visitors and local residents who have limited maritime access, despite Incheon being a seaside city known for trade.

Work on the Golden Harbor project began in 2012 spearheaded by both the South Korean government and the IPA, and the facility will be home to a brand new international ferry terminal.

The new ferry terminal is expected to reshape the landscape of the South Korean port industry, which will be able to host the world’s largest 225,000-ton cruise ship as well as another cruise ship that weighs up to 150,000 tons at the same time.

The city could benefit from nearly 56.2 billion won in economic spinoffs if the new ferry terminal attracts 400,000 visitors a year when complete in 2020, the Incheon Metropolitan City Government said.