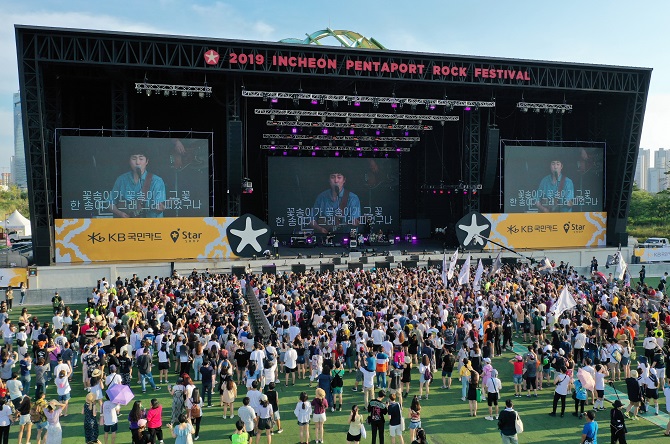 This file photo shows the 2019 Incheon Pentaport Rock Festival under way in the port city, west of Seoul. (Yonhap)

The Pentaport Rock Festival and the Songdo Beer Festival, which were held annually in August in Incheon’s Songdo international business district, about 50 kilometers west of Seoul, have been tentatively postponed until after mid-October, because of COVID-19-related travel restrictions, the officials said.

The Pentaport Rock Festival, which marks its 15th edition this year, is one of the biggest annual music festivals in South Korea, and has brought together international and local musicians largely in the rock and electronica genres.

Last year, the festival brought together about 30 rock bands from home and abroad and attracted more than 30,000 attendees per day during its three-day run in the middle of August at Incheon’s Pentaport Park.

This year’s Pentaport festival has been tentatively rescheduled for Oct. 16-17, the officials said.

Festival organizers said they plan to limit the number of spectators to about 1,000 a day as part of quarantine efforts, even if the festival is held in October, and offer various festival performances online. 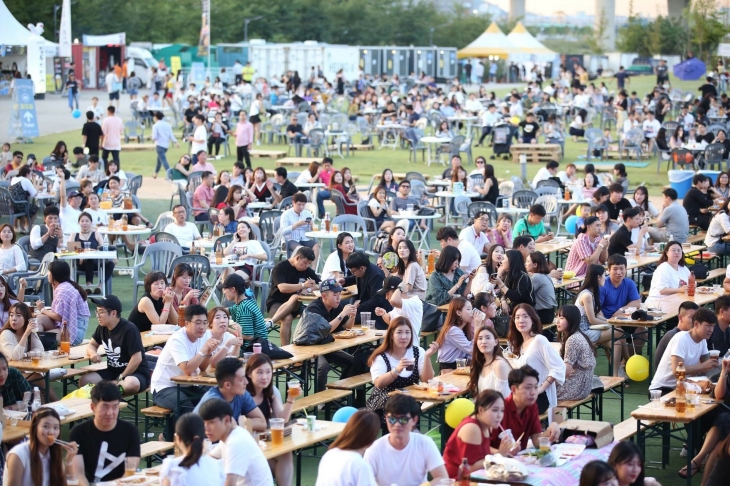 This file photo provided by the organizing committee of the Songdo Beer Festival shows the 2019 festival under way in Incheon, west of Seoul.

The Songdo Beer Festival has been held for nine days in late August annually in the spacious Pentaport Park with the capacity to accommodate more than 30,000 participants, featuring a variety of summer night entertainment events, performances and fireworks, in addition to beer and food.

The beer festival, which celebrates its 10th anniversary this year, drew more than 300,000 participants last year.

“It is virtually impossible to hold the beer festival in August as scheduled. Even if it is postponed, it won’t be held until after the Pentaport Rock Festival,” said an official informed of the beer festival.

Meanwhile, Incheon’s Songdo Cruise Fireworks Festival, which was tentatively postponed from April to August or September, has been canceled due to the coronavirus pandemic.

“Postponements or cancellations of planned festivals are inevitable this year because of the coronavirus-related uncertainties. Instead, scaled-down or online performances will be offered for fans and aspiring participants,” an Incheon official said.