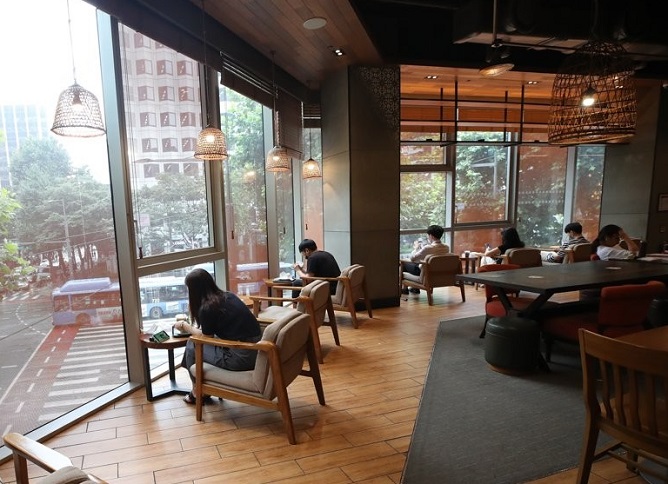 Customers keep distance from each other at a cafe in Seoul on Aug. 21, 2020, amid continued worries over the new coronavirus. (Yonhap)

SEOUL, Jan. 27 (Korea Bizwire) — The number of South Koreans receiving psychiatric treatment turned out to have increased markedly in the spreading stages of the coronavirus.

According to a report released by the Korea Insurance Research Institute, the number of visits to psychiatric clinics marked a 9.9 percent increase in the first half of last year compared to a year before, with treatment expenses rising by 17.9 percent during the same period.

In contrast, the number of visits to other clinics declined during the period due to concerns about possible infections.

The number of visits to pediatric clinics and the otolaryngology clinics declined by 35.9 percent and 31.3 percent, respectively, with expenses of related medical treatment falling by 24.5 percent and 16.2 percent.

The number of patients who visited the departments of internal medicine, surgery and obstetrics during the period slid by 6.1 to 6.6 percent year on year, although expenses for medical treatment rose.

In the first half of last year, the number of psychiatric patients with depression or sleep disorders registered a sharp increase, particularly during the period of the first wave of infections.

In February, the number of male and female psychiatric patients rose by 8.54 percent and 9.86 percent, respectively, compared to a year before.

During this period, in particular, the number of psychiatric patients increased sharply among those in their 20s and 30s.