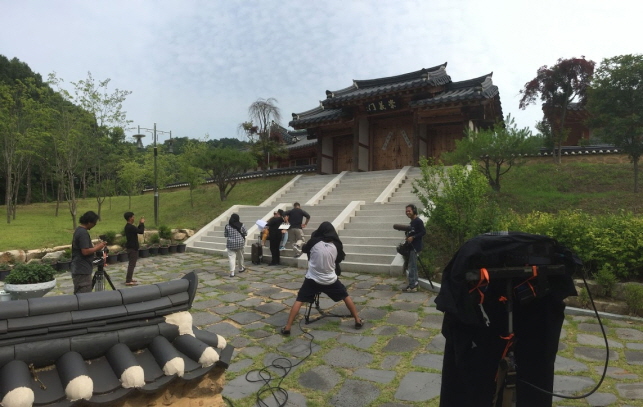 The main actors and 15 crew members for the two TV dramas shot all of the Korean background scenes in Andong’s Hahoe Village and Confucian Culture and Tourism Park. (Yonhap)

SEOUL, Aug. 23 (Korea Bizwire) — “People in Indonesia want to know other cities of South Korea than Seoul. Andong is a perfect place where people can really enjoy the real essence of South Korea.”

Currently, Novita is one of Indonesia’s leading pro-Korean figures, including being the chair of the Indonesia-Korea Friendship Association’s entertainment committee.

“Since I first visited Seoul in 1994, I have been to Korea more than 20 times,” Novita said. “Korea is like my second hometown.”

The producer went on to comment on the experience of filming in Andong, noting, “No matter where we shot it Andong, the background was beautiful, and the citizens were really kind.”

In 2012, Novita produced the first South Korea-Indonesia joint drama “I Love You,” with 30 episodes. The drama was played by a team of Korean singers.

The latest production, “My Beauty for You Only,” tells the story of a woman who falls in love with the Korean Wave and comes to Korea to have plastic surgery.

But the main character is cheated by an Indonesian agency in South Korea and works part-time to learn the true value of beauty.

Another production, “Me and Mom Go to Korea” tells the story of a woman who has a daughter who is good at studying by herself.

The mother decided to get married to help pay her college tuition and come to Korea with her daughter.

The main actors and 15 crew members for the two TV dramas shot all of the Korean background scenes in Andong’s Hahoe Village and Confucian Culture and Tourism Park for five days from June 29 to July 3.

The drama will air in October, but the actors have been enjoying the promotional effects of Andong by posting photos taken in Andong on social media.